A 50 year-old man with fever and necrotizing leg ulcers

The patient is a 50-year-old chef who presented initially with blisters on the left leg. Within 3 days, the leg had swollen, painful with redness over the left leg.  He was admitted to the local hospital and was treated by an orthopedic surgeon for cellulitis for 10 days.  He requested AOR (at own risk) discharge and came in to seek for 2nd opinion.  His other medical history included COAD and hypertension.

Physical examination revealed an anxious man, breathless, tachyphniec with hight temperature of 38 deg C. His left leg appeared edematous, extensively inflamed from the foot to the knee, tender, with 3 large and deep necrotic with sloughy ulcerations on the left lateral malleolus, dorsum of left foot and ankle. There was no purplish or undermining edge. The peripheral pulses dorsals pedis was good. 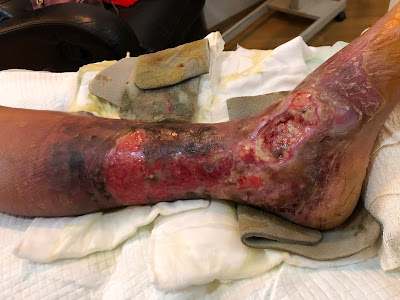 Diagnosis: Necrotising cellulitis left leg
Swab was taken from the leg wound but did not grow any pathogens. He was started on IV ceftriazone 1 gm bd, wash with dermazine solution, bactigrass followed by gamjee dressing.  His blood counts and biochemistry was unremarkable except severe hypoalbuminemia. He was given IV albumin 50mg daily for 3 days.  A skin biopsy was done to exclude pyoderma gangrenosum.  His CXR showed hyperinflated lungs suggestive of emphysema.  His X ray of the left was unremarkable. His fever persisted. What kind of wound dressing would you recommend? What other empirical antibiotics would you recommend - the culture did not grow any pathogens.
Reference:
1. Unna Boot Efficacy in Dermatologic Diseases

Conclusion: Unna boot (UBs) are an inexpensive and noninvasive treatment strategy in which compression, antioxidants, physical restraint, and improved topical medication absorption enhance healing as well as quality of life measure. Even though the UB has been employed successfully by dermatologists for over a century, prior research regarding diseases treated, concurrent therapies used, and adverse events reported is minimal and UBs remain underutilized. Our findings suggest clinicians should consider using UB for a wide variety of dermatologic diseases when conservative management is a viable option. These results highlight that UBs are effective and well tolerated across a spectrum of pathologies, but also versatile in the locations where they can be applied.