Pseudocyst of the Auricle 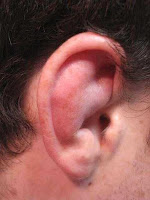 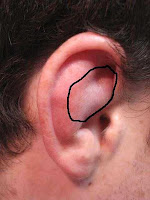 The patient is a 20 yo college wrestler with a one week history of a painless swelling in the right ear. The area outlined is fluctuant but not inflamed.

This is an auricular pseudocyst. It is overly optimistic to think that simple drainage will ensure cure. A number of therapies have been proposed.

For an excellent (and reasonably succinct) review of this subject see eMedicine/Pseudocyst.

This patient was referred to a plastic surgeon -- I will put an addendum after I learn of the therapy. The problem is that most dermatologists do not have enough experience treating this entity. Inadequate treatment can result is a permanent deformity of the auricle.

Posted by Humane Medicine Hui at 10:41 AM No comments:

Abstract: 45 yo man with two year history of painful fingers
Posted by DJ Elpern
HPI: The patient is a 45 yo electrician and professional pianist who developed hyperkeratotic patches on his hands two years ago. Nothing new in exposures. After much questioning, he remembered that his mother-in-law moved in with them around that time. (not kidding). The fissures are very painful, especially when playing keyboard. He can use gloves doing electrical work. Patch testing has not been done but is planned.
O/E: Hyperkeratotic areas around thumb and middle finger tips bilaterally. Fissures are deep but clean. He has had similar areas on thenar and hypothenar eminences in past. Remainder of cutaneous exam is unremarkable.
Photos: 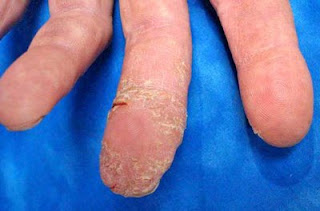 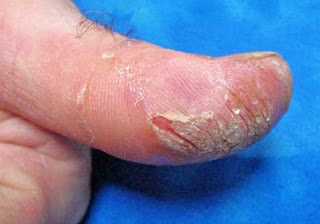 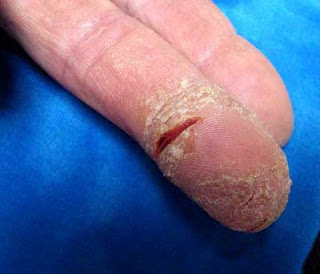 Diagnosis: Hyperkeratotic Hand Eczema, Psoriasis variant? Fristional Contact Dermatitis
Treatment: He has tried potent topical steroids with occlusion and with the Soak and Smear technique. Crazy glue for fissures. Intralesional triamcinalone 10 mg/cc helped the palmar keratoses. He has had one month of methotrexate 10 mg per week. Only the intralesional TAC has helped but he does not want finger tips injected at this time.
Questions:
1. What do you think the diagnosis is? The role of trauma may be key as he works with his hands as an electrician and his fingers are "traumatized" on the keyboard.
2. Do you have any magical therapeutic suggestions?
3. I have heard that X-ray treatment was used in the past. Any rational for Grenz?
4. Further work-up
Reason Presented: This man is at his wit's end with pain. He can't play the piano since every time he hits a key he has exquisite pain. I have had one or two similar patients -- they just got better over a few years seemingly not related to treatment.
Reference:
E. McMullen, D.J. Gawkrodger, Physical friction is under-recognized as an irritant that can cause or contribute to contact dermatitis. Br J Dermatol. 2006:154;154-156
Department of Dermatology, Royal Hallamshire Hospital, Sheffield U.K.
Full Text of Article
Background The role of physical friction as an irritant in the causation of contact dermatitis is under-recognized. Frictional dermatitis is defined as an eczematous process in which physical frictional trauma contributes to the induction of a dermatitis process.
Objectives To examine the clinical background of patients in whom friction was contributing to dermatitis.
Methods Over a 30-month period during which 2700 new patients were seen, frictional irritancy was identified as playing a role in the dermatosis in 31 cases: in 27 of these, case notes were evaluated for a range of parameters.
Results Physical friction was identified as causing or contributing to the dermatitis in 18 men and nine women, mean age at onset 42 years. The hands, usually the fingers of the dominant hand, were affected in all but two cases. Occupational frictional activities were found in 25 cases: commonly handling small metal components, paper, cardboard or fabric, and driving. Potential frictional activities in hobbies were noted in 12 cases. Wet work irritancy contributed in four cases (15%). Patch testing showed relevant contact allergies as cofactors in seven of 25 subjects tested (26%). Psoriasis was a cofactor in four (15%), and atopic dermatitis in 11. The study was selective, being based in a teaching hospital clinic with a special interest in contact dermatitis. Frictional irritancy is often one of several factors contributing to dermatitis.
Conclusions The contribution of friction to contact dermatitis is under-recognized probably because dermatologists do not think about the potential for physical forces to induce eczematous changes in the skin.