HPI:  This previously healthy 67-year-old man developed a scaly eruption on his forehead approximately 10 to 14 days after starting pravastatin.  While his lipid profile was not very worrisome his PCP recommended the statin based on new guidelines.  The eruption spread and generalized over the next one to two weeks when he stopped the statin.

O/E:  He presented with a generalized process.  This had features of an erythroderma with islands of sparing.  There is a marked palmoplantar hyperkeratosis with desquamation. There was an early ectropion of the lower eyelids. There is no lymphadenopathy. 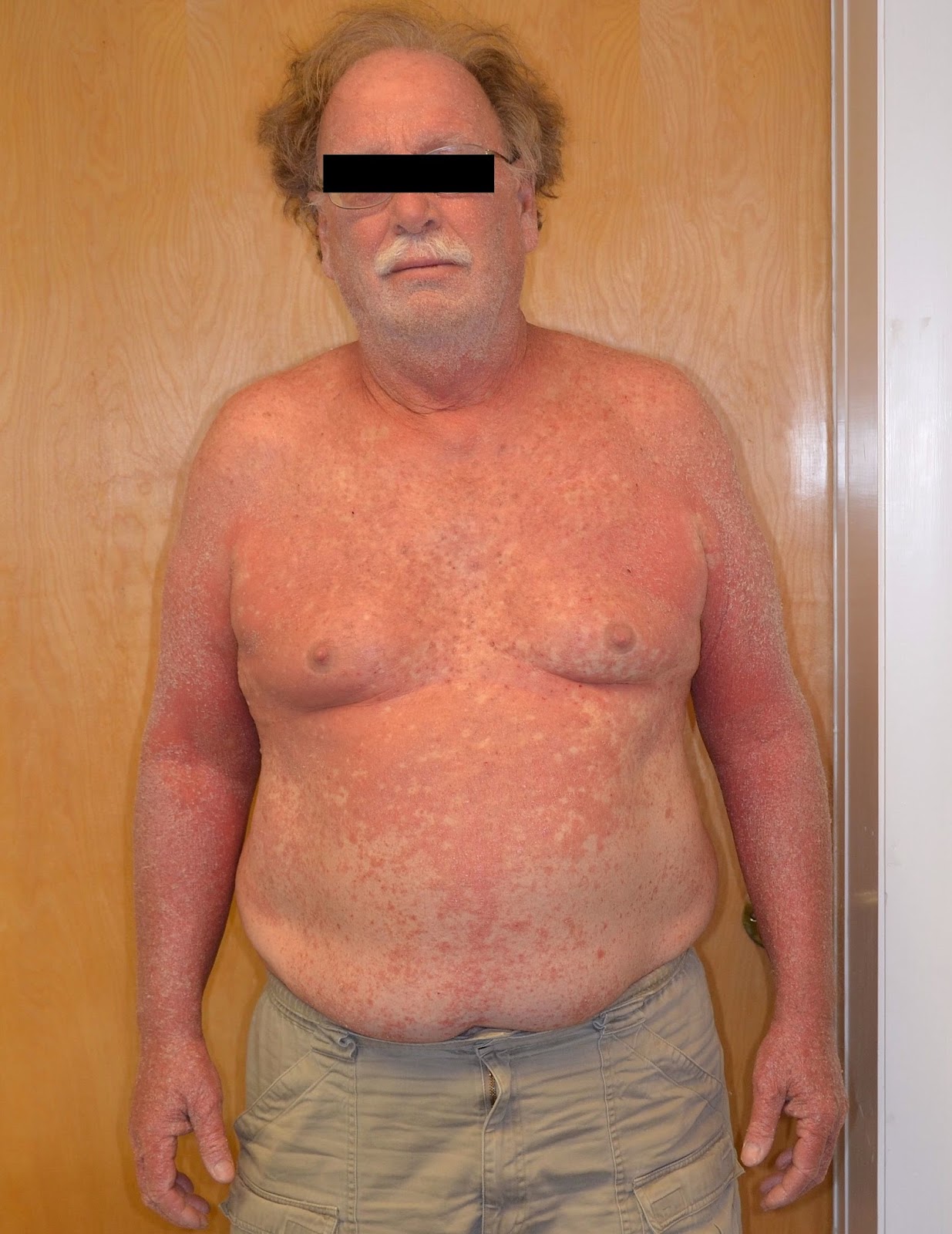 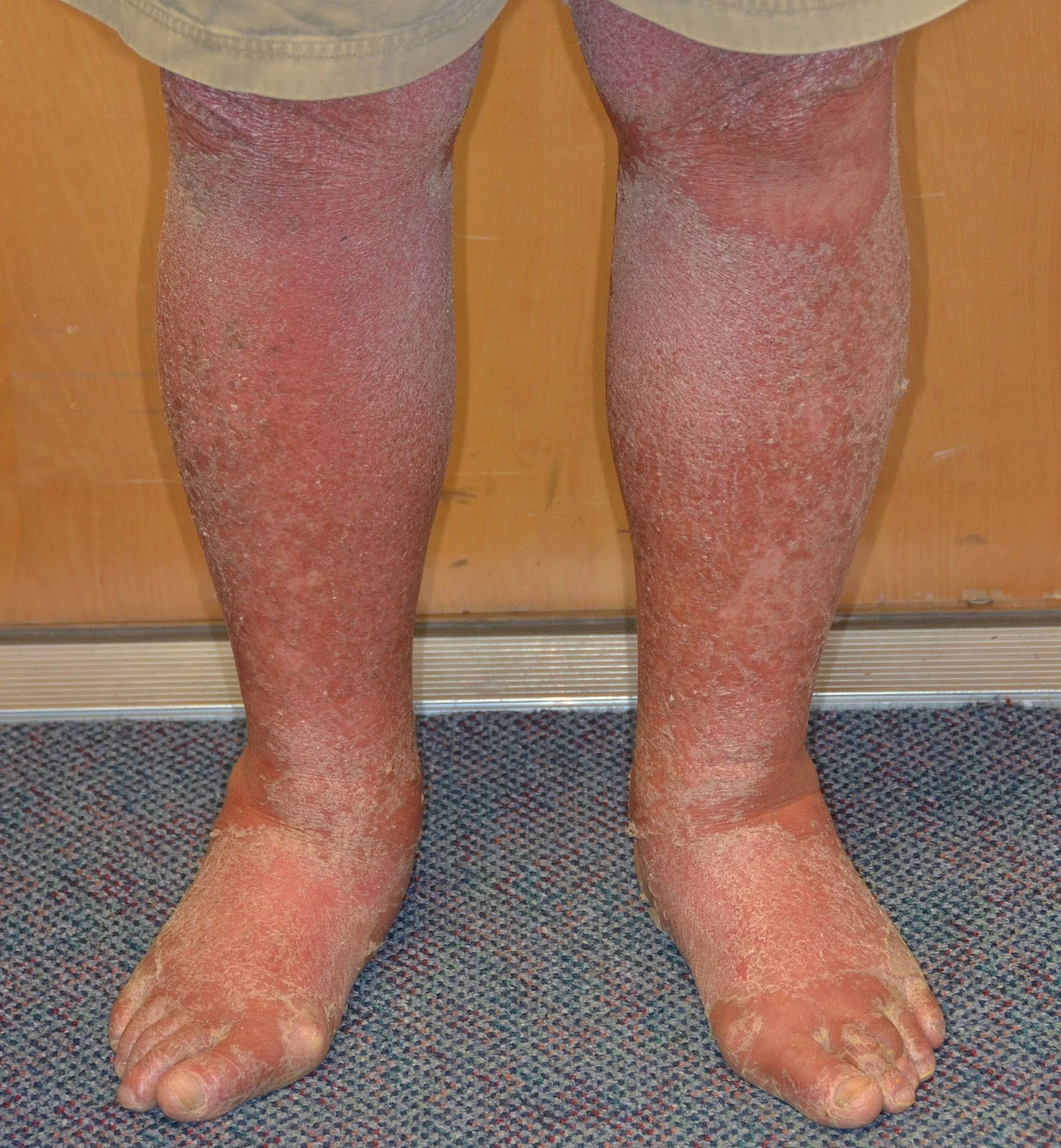 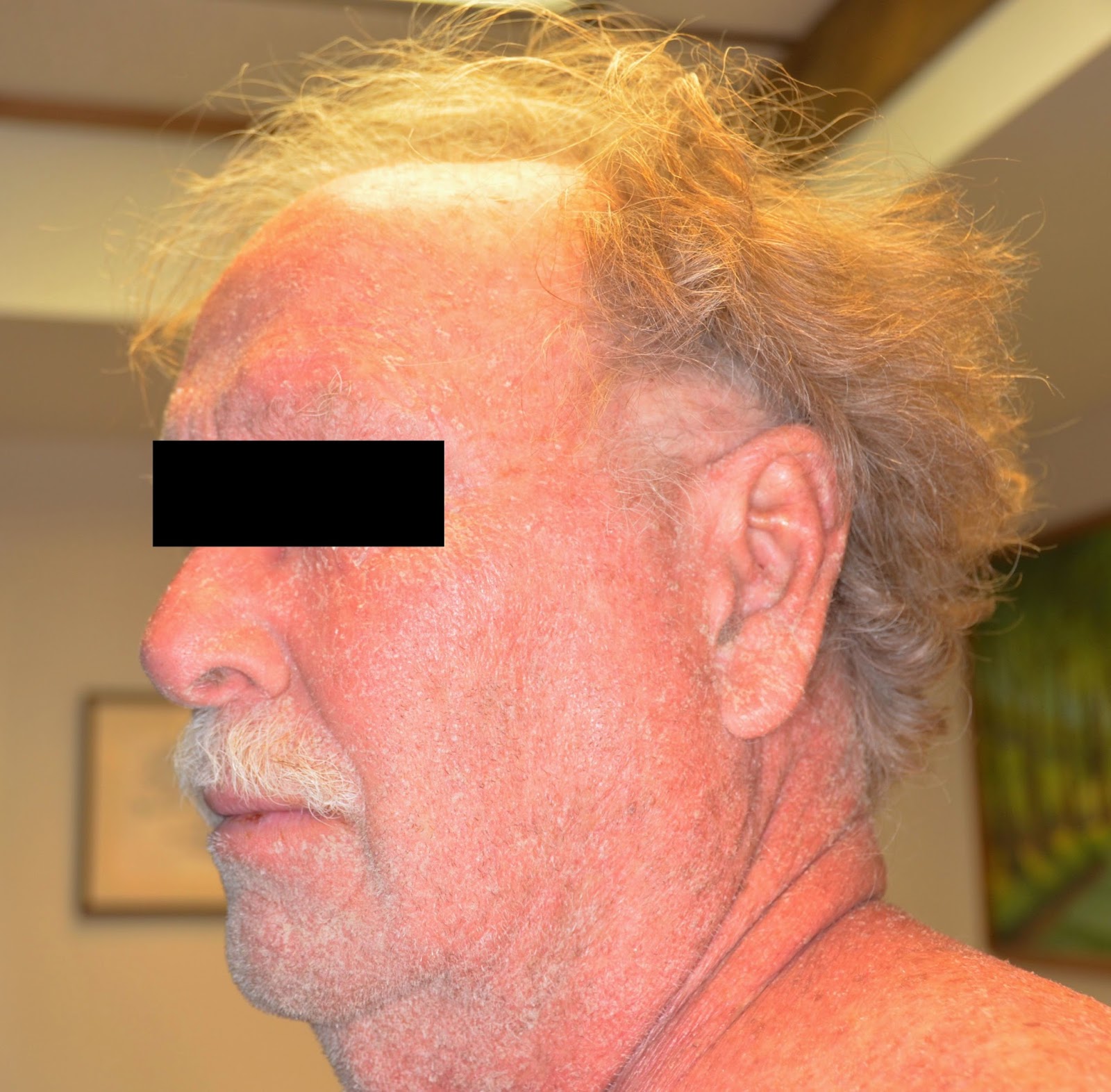 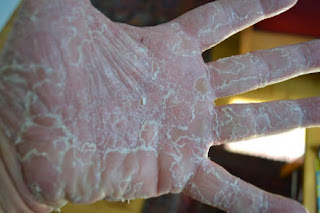 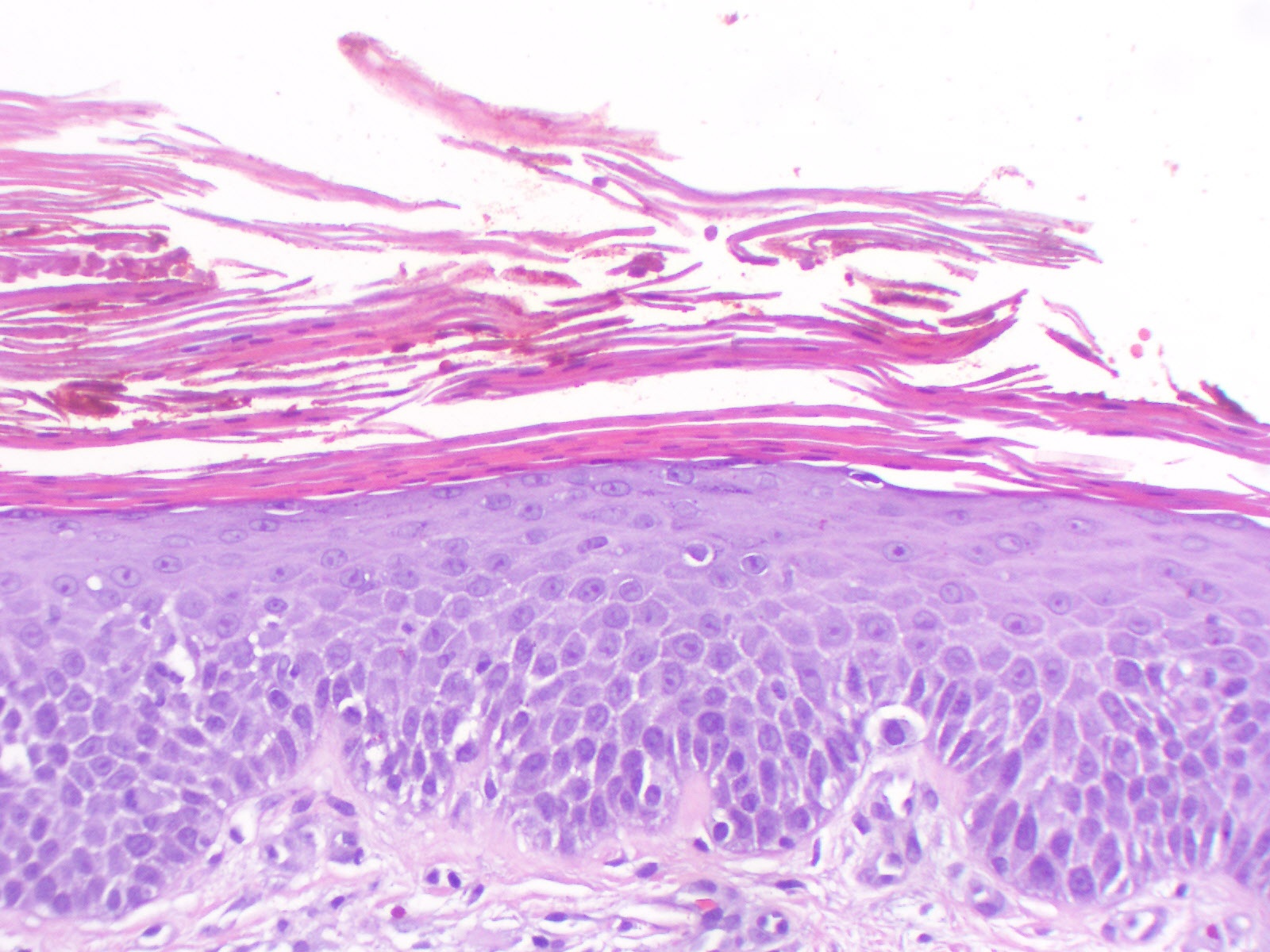 H&E x 200
Alternating orthokeratosis and parakeratosis in both vertical and horizontal directions, a few scattered keratinocytes with perinuclear vacuolization 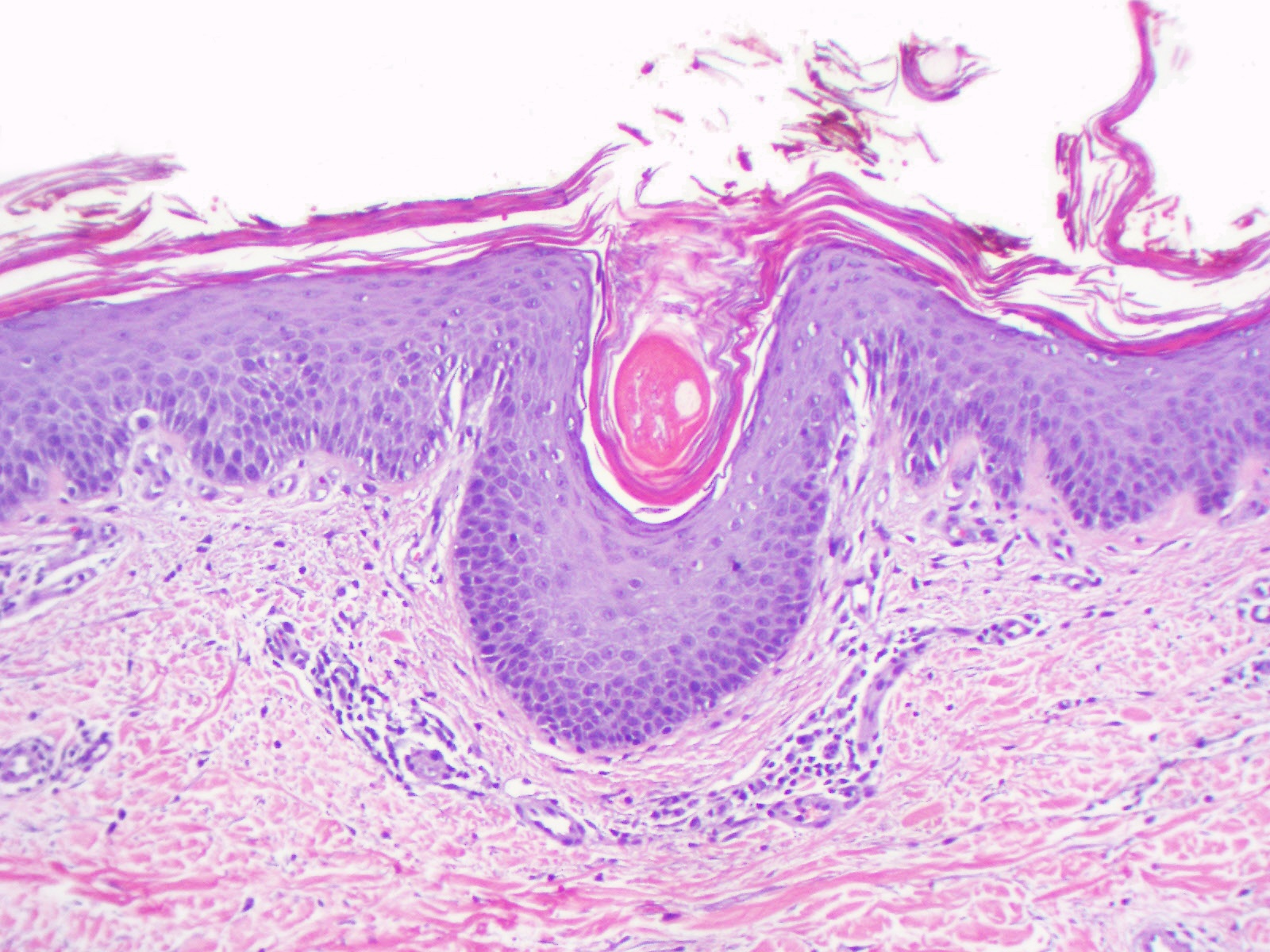 Questions:  Is acitretin the drug of choice in this clinical situation?  Is it preferable to isotretinoin?


3) Adult pityriasis rubra pilaris: a 10-year case series.
Clayton BD1, Jorizzo JL et. al J Am Acad Dermatol. 1997 Jun;36:959-64.
Abstract
BACKGROUND:
Pityriasis rubra pilaris (PRP) often has a devastating impact on the lives of patients. Descriptions of its histopathologic features are not uniform. Finding a successful therapy can be challenging.
OBJECTIVE:
Our purpose was to examine the histopathologic features and response of patients to our standard therapy of an oral retinoid and concomitant or later addition of low-dose weekly methotrexate.
METHODS:
A retrospective chart review was done on 24 patients with PRP seen from March 1986 to March 1996. Biopsy specimens from 19 patients were reexamined. Telephone follow-up was conducted to determine maintenance of remission.
RESULTS:
All patients had the adult acquired form of PRP. Biopsy specimens from nine patients were characterized by prototypical findings of PRP, while the others included both typical and other features. Twenty-two patients were treated with either isotretinoin, 40 mg twice daily, or etretinate, 25 to 75 mg/day. Six patients with more disabling involvement had low-dose weekly methotrexate ranging from 5 to 30 mg started concurrently. Five patients had weekly methotrexate added at a later time. Seventeen patients showed 25% to 75% response after 16 weeks of therapy. All patients whose skin cleared maintained their remission.
CONCLUSION:
Initial oral retinoid plus concurrent or later low-dose weekly methotrexate resulted in 25% to 75% improvement of PRP in 17 of 24 patients after 16 weeks of therapy. Some of the atypical features seen in biopsy specimens emphasize the importance of clinical and histopathologic correlation in establishing the diagnosis.