A Challenging Case of Cystic Acne

Abstract:  28 yo woman with 3.5 month history of cystic acne

HPI:  The patient's mother contacted us regarding her daughter, a 28 yo woman with severe cystic acne for over three months.  She has had acne in the past, but has also enjoyed long acne free periods as well. No recent changes in medications. The patient has a complicated medical and psychiatric history.  She has had a diagnosis of bipolar illness disease (BPD) for greater than ten years.  She has two children but her pregnancies were possibly complicated with hypercoagulation secondary to Protein S (history vague).  She has been hospitalized for psychiatric disease.  Presently, shes care for her children and is in school hoping to get a degree in social work.  She is on a host of medications which include lithium, a mini OCP (progesterone only because estrogen is contraindicated due to Protein S).  She is understandably depressed as a result of her acne.

O/E: The patient is a sad looking woman who sat in the waiting room with a baseball cap low on forehead and head bowed. She has cores of small to moderate cysts covering face.  Back and chest clear.  She is aesthenic. 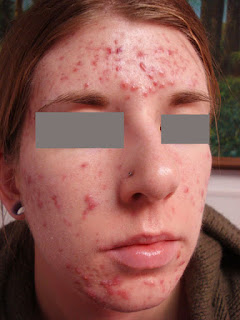 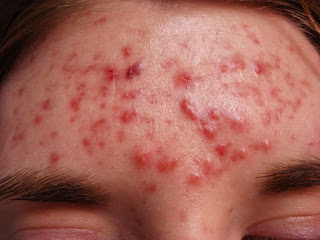 Questions:
It seems that periodically something triggers her acne.  What are your thoughts?
Workup:  Which serum androgens should be ordered?  I am considering Total and Free Testosterone and DHEA-S.
Management:  Since estrogenic OCPs are contraindicated and tetracyclines have interactions with lithium, what is best approach?
Lithium and progesterone both can cause acne flares.  Do they act synergistically?
I started her on amoxicillin 500 mg tid until I get some better ideas.
There is a worrisome article on the use of isotretinoin in patients with BPD. (Ref 1)  Do you believe this?

Abstract: 13 year-old boy with a few years history of lichen nitidus
HPI:  This is a 13 year-old Hispanic boy who presented for treatment of warts. During the exam, multiple small white shiny dots were noticed. The patient has been aware of these asymptomatic lesions for the past few years.  He had been given triamcinolone 0.1% ointment bid, but forgot to apply it because it did not bother him.
O/E:  There  are multiple pinhead-sized 1 mm white shiny flat-topped papules in an oval shape on the right knee. 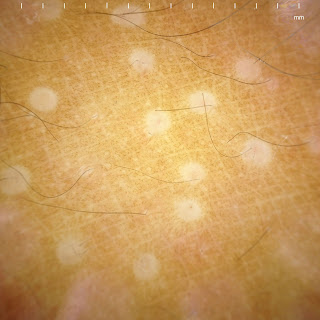 Discussion:
While there are many dermoscopic studies on the skin cancers, there is a growing interest of dermoscopic features on other skin diseases such as inflammatory diseases, connective tissue disorders, or even psychogenic related skin diseases. Lichen nitidus is easily recognized clinically with experienced eyes. With my own interest in dermoscopy, I report an interesting dermoscopic finding of lichen nitidus. There are 1-2 mm multiple small white circles which represent subepidermal infiltrate of lymphocytes, histiocytes, and multinucleated giant cells in the dermal papillae.

Lichen nitidus was first described by Pinkus in 1907. Lichen nitidus, which means shiny papules, is a relatively uncommon, asymptomatic, chronic eruption, consisting of minute sharply demarcated skin-colored papules. It has a predilection for males (4:1) and the mean age of onset was 7 yrs for males and 13 yrs for females. Typically, patients present for assessment with an asymptomatic or mildly pruritic eruption. The eruption may be localized to one or more areas or generalized in distribution. The pathogenesis of lichen nitidus is unknown. It was originally believed to be a form of tuberculid and more recently considered to be a variant of lichen planus. Histologially, lichen nitidus is characterized by a circumscribed collection of inflammatory cells in the papillary dermis that abuts the overlying epidermis. The inflammatory infiltrate consists of lymphocytes, histiocytes, and multinucleated giant cells. DIF negative.  Most cases require no treatment due to the asymptomatic nature of the eruption and tendency for spontaneous resolution. For symptomatic cases, moderately potent or potent topical steroid therapy may help. There are a number of anecdotal reports of improvement or clearance with narrow band UVB phototherapy, extensive sunlight exposure, oral astemizole, oral cetirizine-levamisol combination, topical dinitrochlorobenzene, itraconazole and oral cyclosporin. Oral retinoids have been used successfully in the treatment of palmoplantar lichen nitidus.

Comment: By DJ Elpern.  This is the first report of the dermatoscopic appearance of L. nitidus.  Yoon Cohen deserves credit for this observation.

HPI:  This 65 yo man has had a dermatitis around his hips since childhood.  In 1999, a biopsy was done that was reported as "very suggestive of MF."  He was treated with PUVA in 1999  and since then with topical corticosteroids (initially clobetasol and more recently fluocinonide). His disease is either quiescent or has not progressed since diagnosis.

O/E:  There are patches and plaques on the left and to a lesser extent right hips.  Some atrophy and "cigarette paper changes" are present on the left hip.  There is no to minimal involvement elsewhere.  He has no lymphadenopathy. 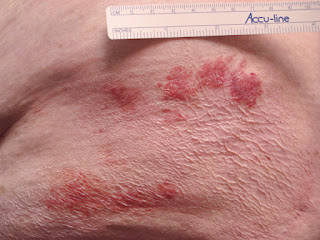 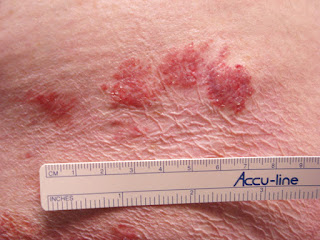 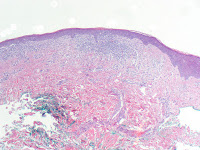 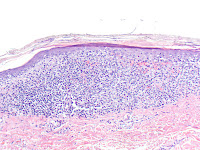 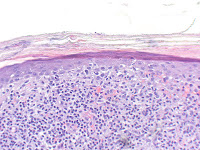 Diagnosis:  CTCL, MF type. Patient has had a rash in the area since childhood.  Since the pathological diagnosis was first made in 1999 his disease has not progressed much and is still probably Stage IA.

Questions:  Do you think this is early M.F.?  Could the poikilodermatous change be due to proponged use of topical corticosteroids? Will treatment make a difference?  He has read about new treatments.  We discussed imiquimod. Does anyone have experience with that?  How would you approach this patient?