Facial Lesion in a Child

Case presented by Dr Munqithe M Jabir, Addiwaniya, Iraq who writes:
"Can I please have your opinion about this problematic case.
The patient is a female child with a swelling on her left cheek for the past three months.  It discharges pus through many openings (carbuncle-like!!).  There has been no change although many courses of different antibiotics, but, recently it has responded slowly to Rifampicin 150mg twice daily and Clarithromycin 250 mg twice daily.  Complete blood picture and ESR are normal." 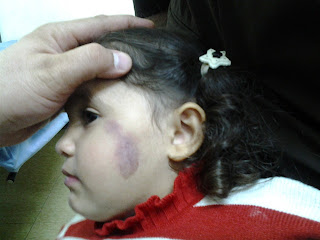 HPI :  This 81 yo man presented with a one day history of a painful inflammatory process of his nose.  He had been in hospital recently and a routine throat culture grew MRSA but since he was asymptomatic, it was not treated. He has atrial fibrillation and meds include warfarin.  Here is the history in his own words.