Pemphigus Vulgaris in a 43 yo Woman

The patient is a 43 yo Hispanic female. with several months of bleeding gums, sloughing tissue, and generalized oral pain.   She is otherwise healthy and takes no meds or supplements.  She has no skin or vaginal lesions.

Her oral surgeon did a biopsy biopsy of normal mucosa adjacent to sloughing attached gingiva on anterior mandible and sent this for direct immunoflouresence (DIF). 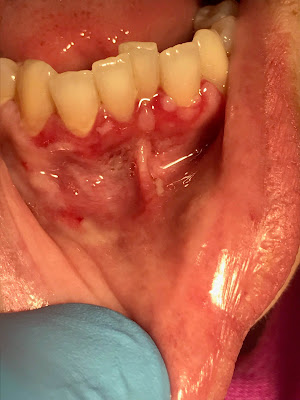 Questions:
This patient does not live close to an academic center and travel there would be difficult.
Does it make sense to initiate therapy with rituximab (if her insurance covers that) + prednisone. or should therapy be initiated with prednisone and conventional  adjunctive added later if nexessary?


1. First-line rituximab combined with short-term prednisone versus prednisone alone for the treatment of pemphigus (Ritux 3): a prospective, multicentre, parallel-group, open-label randomised trial.
Joly P. et. al.   Lancet. 2017 May 20;389(10083):2031-2040.
This is a paper by the French study group on autoimmune bullous skin diseases.
CONCLUSIONS: 32.5% of our patients with moderate to severe pemphigus vulgaris failed prednisone and traditional CAT treatment and required rituximab therapy. Rituximab reduced the monthly prednisone intake in these patients by 73%. This suggests that a subset of patients with moderate to severe pemphigus may benefit from early institution of rituximab therapy. Rituximab significantly reduces the monthly prednisone requirement among CAT-resistant pemphigus vulgaris patients to levels on par with CAT-responsive patients.

2. Comparison of rituximab and conventional adjuvant therapy for pemphigus vulgaris: A retrospective analysis.
Agarwal A, Hall RP 3rd, Bañez LL, Cardones AR.
PLoS One. 2018 Sep 25;13(9):e0198074.  Free PMC Article
CONCLUSIONS: 32.5% of our patients with moderate to severe pemphigus vulgaris failed prednisone and traditional CAT treatment and required rituximab therapy. Rituximab reduced the monthly prednisone intake in these patients by 73%. This suggests that a subset of patients with moderate to severe pemphigus may benefit from early institution of rituximab therapy. Rituximab significantly reduces the monthly prednisone requirement among CAT-resistant pemphigus vulgaris patients to levels on par with CAT-responsive patients.

JAMA Dermatol. 2015 Aug;151(8):878-82.
Intralesional Rituximab in the Treatment of Refractory Oral Pemphigus Vulgaris.
Vinay K, Kanwar AJ, Mittal A, Dogra S, Minz RW, Hashimoto T.
JAMA Dermatol. 2015 Aug;151(8):878-82.
Abstract
IMPORTANCE:
Oral lesions of pemphigus vulgaris are usually recalcitrant and respond slowly to treatments. Corticosteroid injection is considered to be the most effective local treatment in oral pemphigus vulgaris. However, intralesional corticosteroids are not effective in all remnant lesions. In 3 such patients with pemphigus vulgaris, we evaluated the utility of 2 injections (on days 1 and 15) of intralesional rituximab, 5 mg/cm², in terms of accelerated healing, limitation of the use of systemic immunosuppressants, and reduction of their adverse effects.
OBSERVATIONS:
Three patients (1 man and 2 women) received 2 doses of intralesional rituximab in March and April 2013. All 3 patients responded to the treatment. In patients 1 and 2, the objective severity score was reduced to 0 at the final visit from a baseline score of 4 and 5, respectively (range, 0-11). The subject severity score in these patients was reduced to 1.0 and 0 from a baseline score of 22.0 and 22.5, respectively. After clinical remission was achieved, patient 3 developed a relapse of mucosal lesions. At the final visit, all of the patients were satisfied with the treatment, with a mean satisfaction score of 8 (maximum score, 10). We found a marked decline in the CD19 cell count from a pretreatment mean count of 287 cells/µL to 6 cells/µL on day 15 after a single intralesional rituximab injection. Adverse events were limited to local pain in 1 patient.
CONCLUSIONS AND RELEVANCE:
Intralesional rituximab administration lacks the adverse effects of intravenous administration. This method reduces the amount of drug administered and therefore is less expensive. Encouraging results from our study should prompt further evaluation of this novel route of rituximab administration in patients with refractory oral pemphigus vulgaris.

The patient is a 17 year-old girl whose first episode of bruising occurred after trauma sustained while playing soccer in March of 2018.  The middle child of three, she comes from a stable family.  She is an active varsity athlete.


For purposes of VGRD, the present illness consists of episodes of unexplained ecchymoses occurring every few months since March 19th, 2018.  This initial ecchymosis was tender and persisted for a month.  She has had three more episodes of bruising since then, not all related to antecedent trauma.

Thorough hematologic/coagulation workup was normal except for a minor platelet defect on electron microscopy that was felt insufficient to be causing the ecchymoses.

Two weeks ago she had another spontaneous episode of ecchymoses on her abdomen and neck, that are illustrated in photos.  Although her past ecchymoses have been tender, this most recent extensive bruise on the neck was very painful, and exquisitely tender to light touch.  Over the past two weeks these are slowly resolving.

On questioning both patient and her parents deny any adverse childhood experiences and nothing suggests a factitial etiology. 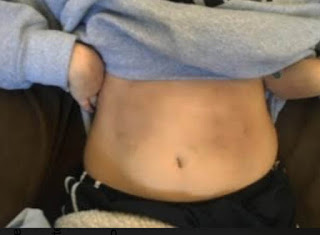 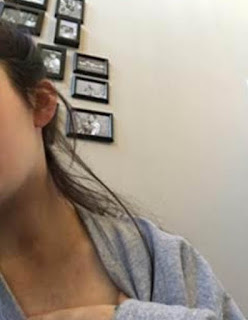 Lab: Extensive laboratory studies have been normal.
An intradermal autoerythrocyte sensitization test has not been done yet.  Among the many studies done, an MRI showed a small pituitary microadenoma that was considered to be an incidentaloma.

Questions:  GDS is a controversial diagnosis.
1. What are your thoughts regarding this entity, especially in reference to this young woman?  She will see a pediatric rheumatologist and a pediatric  dermatologist and a pediatrician with a special interest in adolescent medicine.
2. How can you tie together her disparate pelvic and urologic symptoms, as well as her unexplained nausea and vomiting with her bruising?

One can imagine how unsettling and scary the past two years have been for this young person and her family.  Your thoughts and suggestions will be appreciated.
Posted by Humane Medicine Hui at 10:33 AM 5 comments: