Painful Brusing in a 29 yo Woman

Abstract: 29 yo woman with one week history of painful bruising on thighs

HPI: The patient is an otherwise healthy 29 yo woman with a one week history of painful bruises on her thighs. Five years ago she had leucocytoclastic vasculitis of her lower legs and very mild proteinuria. A renal consult felt she probably had mild IgA nephropathy. This has cleared. Her only medication is paroxetine, which she has been on for three months. She denies any trauma. The patient is a single mother of two children (11 and 3 years old) and lives alone with her kids. She was in school recently but is now on disability for "seizures" (although she is on no antiepileptic medications at present). She has been assaulted by a boyfriend in the past, but denies trauma this time.

O/E: There is purpura of the lateral thighs bilaterally. No evidence of LCV any longer. The remainder of the cutaneous examination is unremarkable. 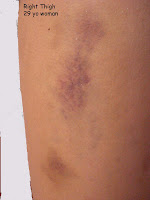 Lab: CBC, Chemistries, Urine Analysis all normal save for trace + rbcs. No proteinuria any longer.

Diagnosis: This is most likely traumatic purpura in a young woman who is reluctant todivulge an accurate history. Gardner Diamond Syndrome (autoerythrocyte sensitization syndrome, psychogenic purpura) was considered as well.

Questions: What are your thoughts?

HPI: The patient is a 40 yo man who sustained traumatic abrasions of his leg and arm from a motorcycle accident on May 31, 2011. He has a history of chronic vesicular dermatitis of hands and feet complicated by recurrent staphyloccal cellulitis of legs. The wound on his right knee became infected and he was hospitalized over the summer on two occasions for parenteral antibiotics and debridement. As a result of this wound he has lot his job and his family is living marginally.

O/E: September 14, 2011. There is a nine cm relatively clean ulcer over the right knee. It has shown no tendancy to heal over the past month. 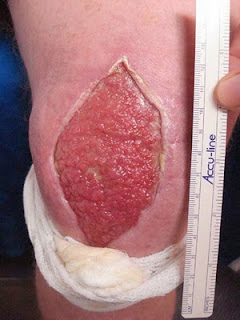 Questions: How would you approach this lesion so that the patient can heal and get back to work? At present, he is getting dressing changes a few times a week and there are no plans for further surgical interventions. It looks like this will take months to heal by secondary intention.

Follow-Up: 10/19/2011 I have seen the patient on two occasions since this posting. The ulcer is ~ 75% better with just daily dressing changes with Vaseline impregnated gauze. He has not needed any further antibiotics. I expect it will be completely re-epitheliazed in two to three weeks.
Posted by Humane Medicine Hui at 9:33 AM 5 comments:

Abstract: 20 year-old Malaysian college student with one day history of an itchy line on right arm.

Yeat's History:
I developed itchy welts all over my body shortly after moving into my new dorm room. A bite on my right wrist caused extensive swelling and intense itching within 24 hours of first discovery. Within 36 hours, a swollen, pruritic red streak extended from my wrist to my upper arm.
A bite on my left ring finger caused extensive swelling and intense itching within 24 hours. Within 36 hours, the swelling and itching had spread to the back of my hand.
After bumping into Dr. Elpern on the street, I started a course of antibiotics (Augmentin) and took antihistamines (Clarityne and Benadryl) to relieve the pruritus.

O/E: (DJE) I bumped into Mr. Yeat on Sunday morning, September 4th on the Williams College campus and he showed me his hands and arms. There were erythematous papules with some superficial crusts on the hands and a lymphangitic streak on the volar right arm extending towards the elbow. Other than pruritus, he felt well and had no fever. 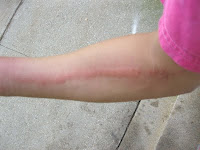 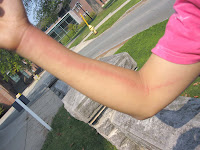 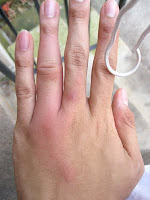 Diagnosis: Although initially I was concerned about a bacterial lymphangitis, I now think this is most consistent with lymphangitis secondary to insect bite rather than a sign of a bacterial etiology. Yeat knows the initial lesions are bites and he feels well otherwise. I suppose a bite could have been superinfected with strep, so the Augmentin makes sense; but it could also be based on another mechanism. There are a few pertinent references including one from the BMJ which Mr. Yeat found (# 2). I am not convinced this is from bedbugs as many types of arthropod bites apparently can cause lymphangitis. It's curious that so few cases have been reported. This may be because the patients appear to have a bacterial process, are treated with antibiotics and get better as they would over a few days even without the medications. It would be important to know if bed bugs have been found in his dormitory.

(Note from Yeat one week after onset: "The swelling has completely subsided, and you can barely see the red streak that the lymphangitis left behind."

Questions: Mr. Yeat and I will appreciate your thoughts. Do you feel the Augmentin was necessary? Have any of you seen similar cases? 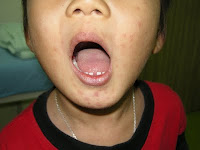 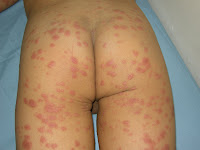 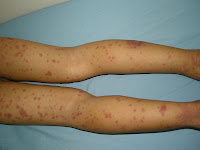 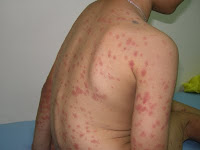 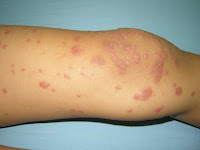 The most likely cause of the EM is HSV infection in this patient. Wonder if you would use systemic corticosteroids in this patient?
Posted by Henry Foong at 11:19 AM 2 comments: