Abstract: 75 yo man with an ominous lesion on his back 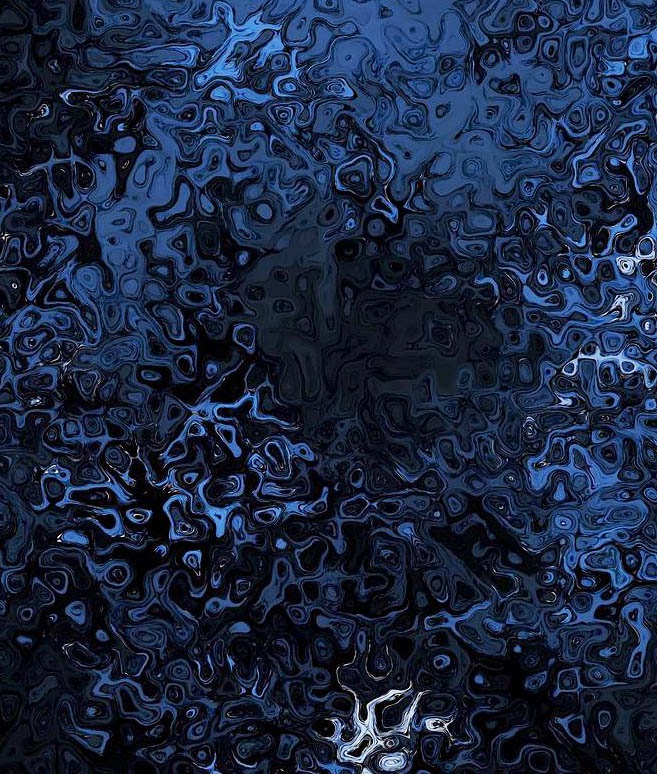 HPI: The patient is a 75 year-old man who rarely sees physicians.  His wife noticed a large number of lesions on his back.  His son had a melanoma of an upper eye-lid.  The patient has never had a skin cancer. His wife had some 5 fluorouracil cream that was over 10 years old and had applied it for a few weeks to the large lesion on his back.

O/E:  His back reminds one of Van Gogh's Starry Night."  Amidst the constellations of starry lesions, one lonely planet stands out.  It is 2.5 cm in diameter.

Clinical Photos: (all images taken by Dr. Yoon Cohen with an iPhone 6) 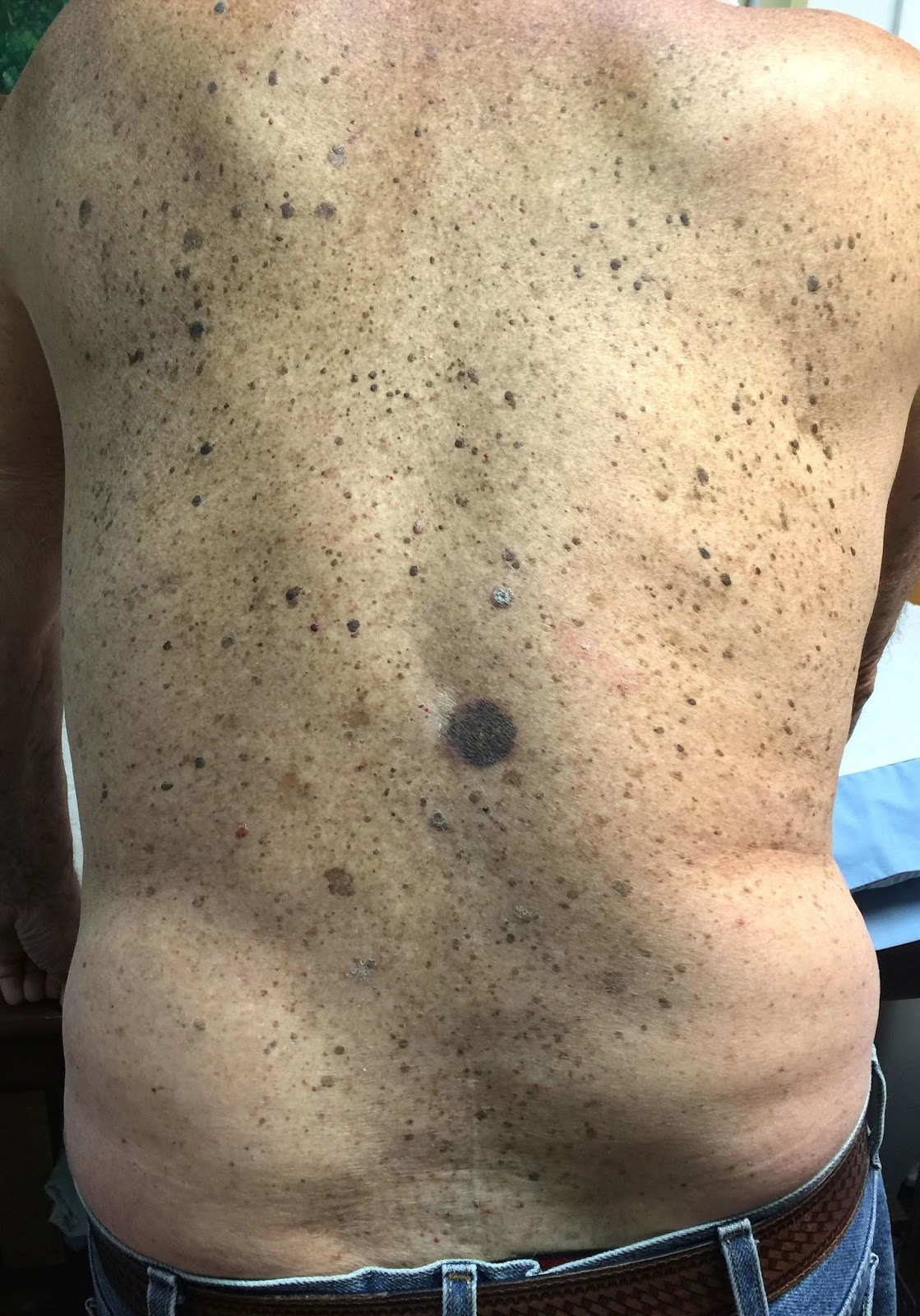 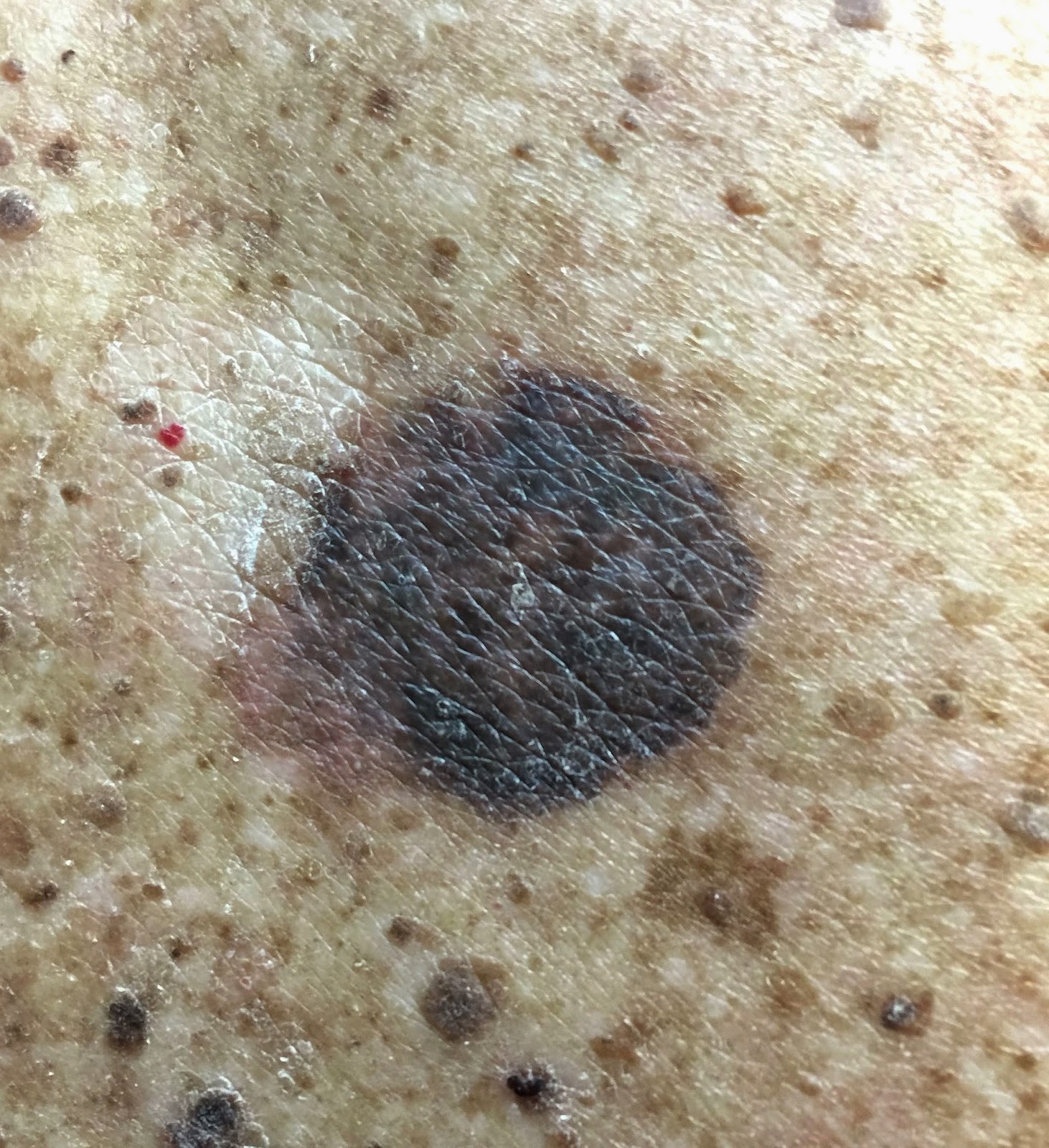 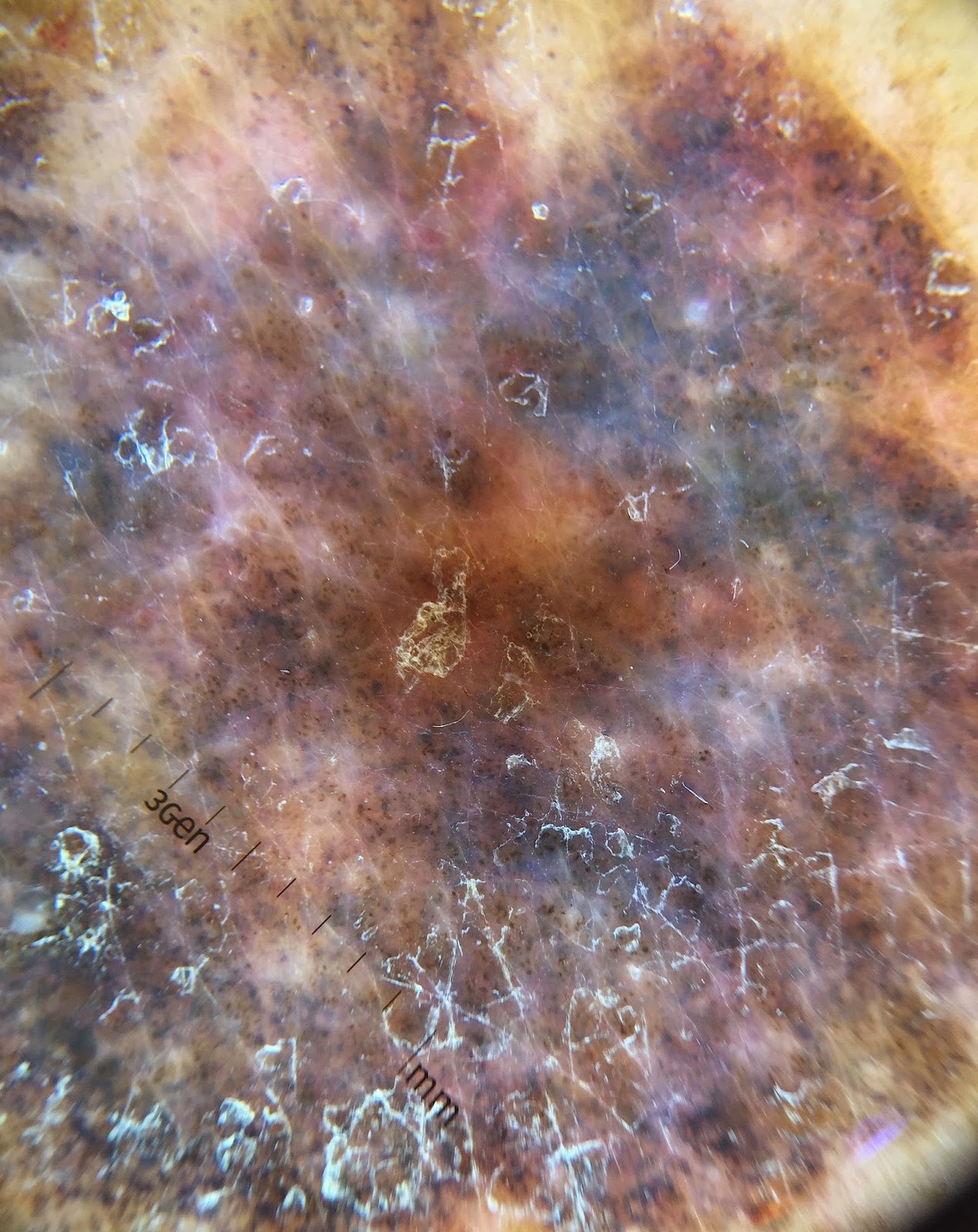 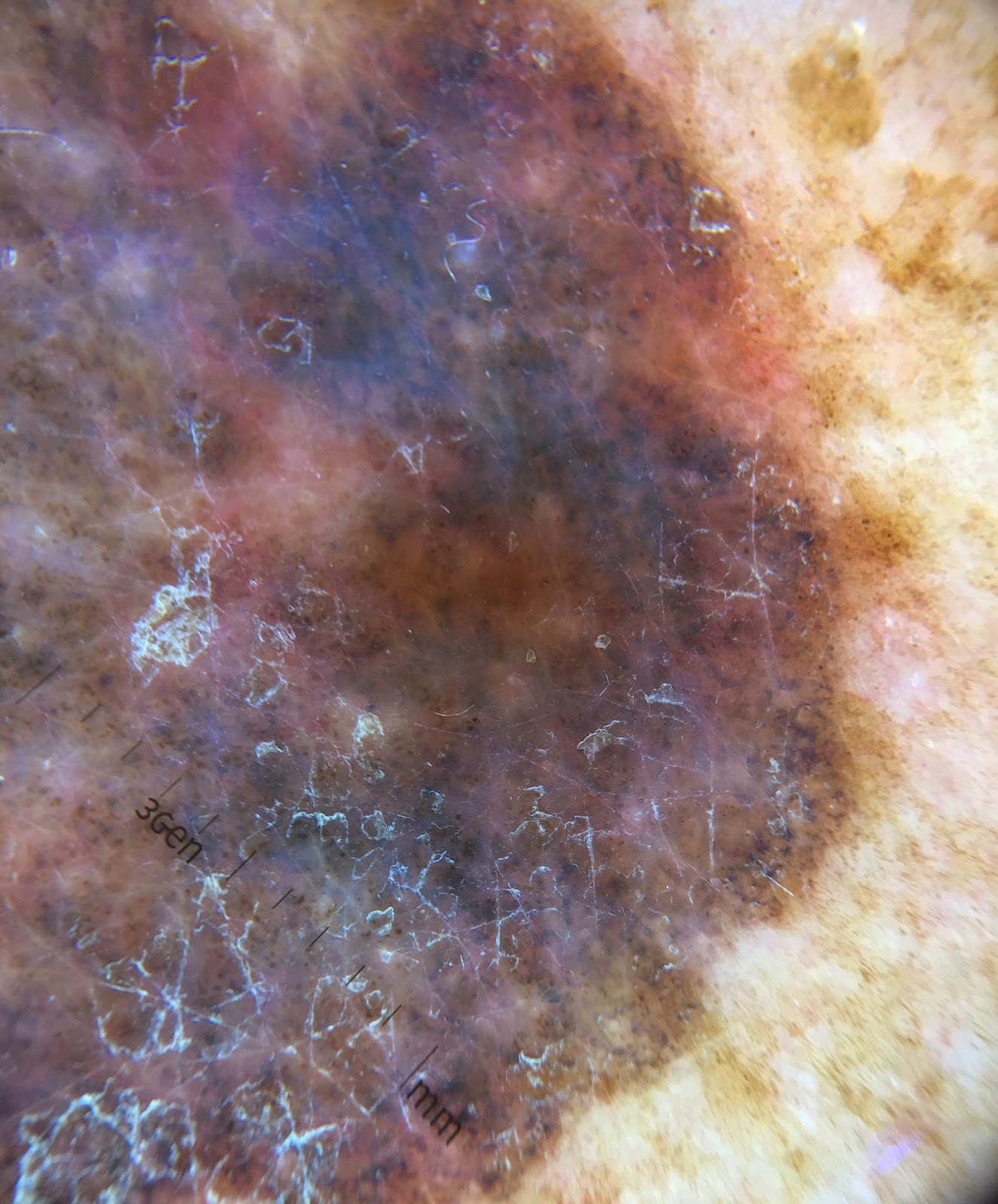 Diagnosis:  Probably Melanoma.  Presentation may have been modified by 5FU Cream.

The biopsy showed no evidence of malignancy.  Six weeks later, we saw the patient in follow-up.  The lesion looked a bit less worrisome,  A large incisional biopsy was taken. Findings will be reported when pathology is ready. 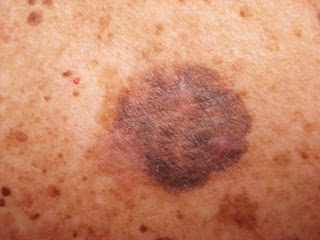 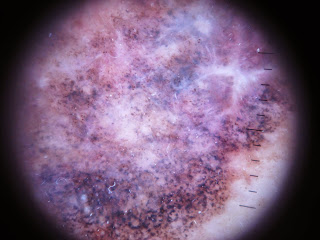 We welcome any comments and diagnostic thoughts.

Posted by Humane Medicine Hui at 6:08 PM No comments:

72 yo man with malaise, rash and leucopenia

Abstract:  72 yo man with two weeks of malaise, 5 days of rash and low wbc

HPI:  The patient lives in rural New Brunswick and is an avid outdoors man who hikes weekly year-round. He noted the onset of malaise and decreased exercise tolerance ~ two weeks ago.  He'd been seen by his G.P., E.R. doctors, and a urologist.  A blood count was done ~ two weeks ago at the E.R. and he was told it his white cells were low, but that he probably had a viral infection.  He developed a rash ~ 5 days ago and sent photos to our New Brunswick teledermatoloy service.

O/E:  The rash is mostly on his torso. There are 1 - 3 cm erythematous plaques on his torso, some with central clearing. 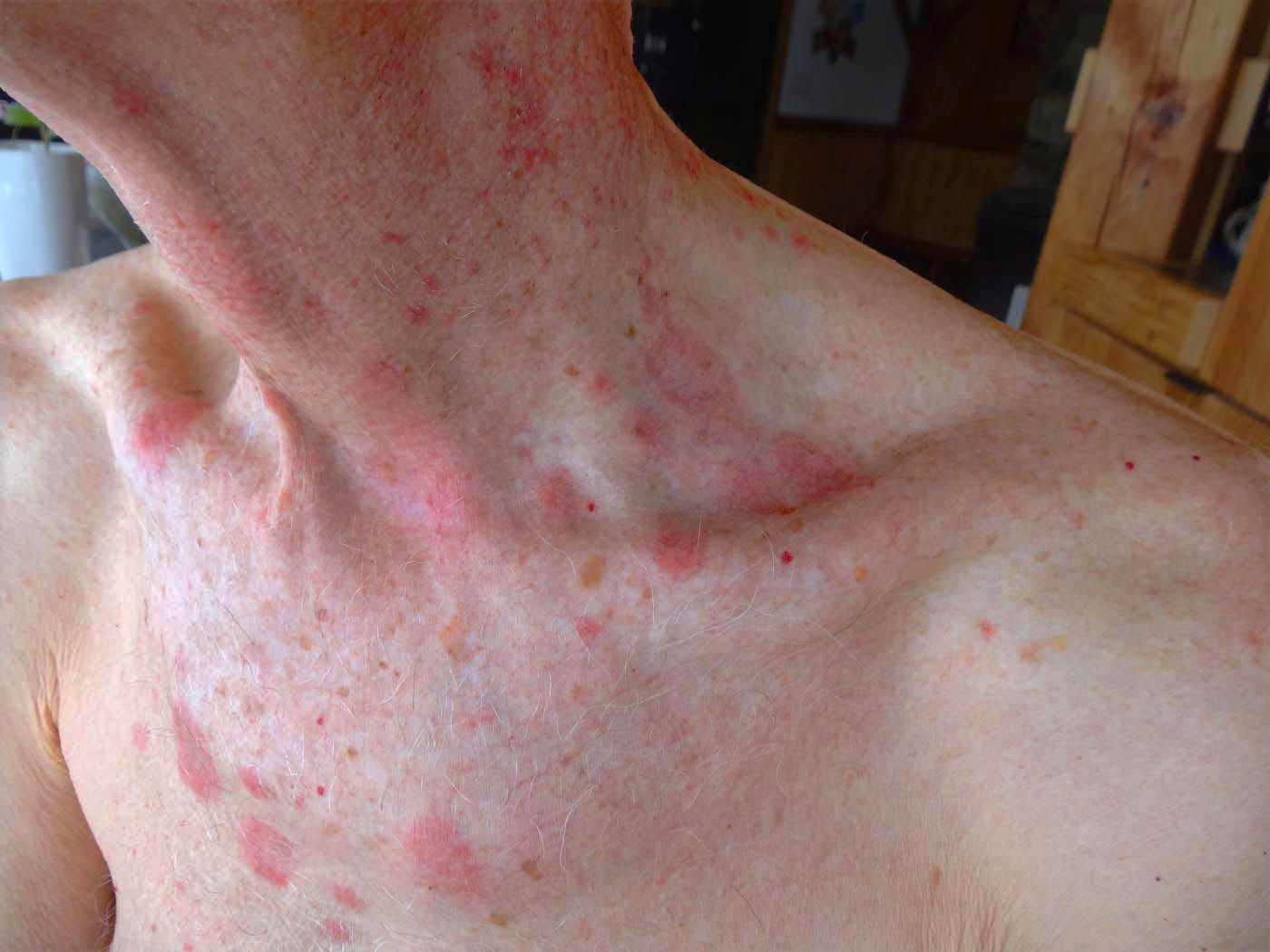 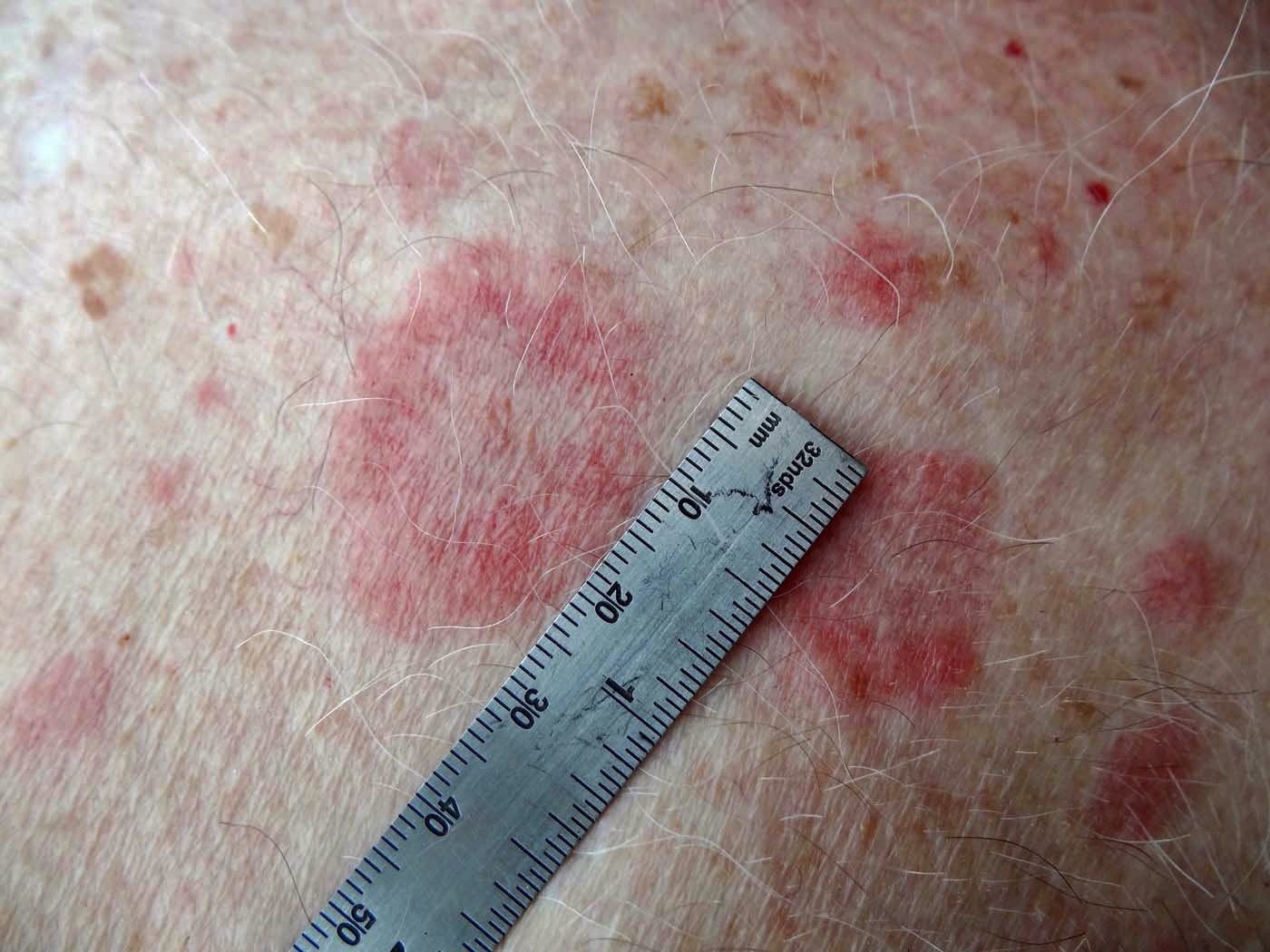 Course:  Over the past week, the patient has felt a bit better and his rash has subsided.

Comments:  The patient lives distant from dermatological and infectious disease specialists.  He was started on doxycycline pending traveling to Moncton, NB to be seen at our hospital centre.  The differential diagnosis is large, but in an outdoors man with leucopenia, malaise and a peculiar rash tick born infection or co-infection needs to be considered.  The rash looks more like secondary Lyme, but thelow wbc goes along with anaplasmosis. Co-infections have been reported.  He has been started on doxycycline 100 mg b.i.d. until he is seen.

What are your thoughts?  We will update this post as more information is collected.

Update:  The patient's wbc bottomed out at 610 before rising to normal levels over a two week period.  His Lyme and Ehrlichia titers were negative x 2.  His rash gradually cleared and he felt better.  We assume he had Ehrlichiosis with negative titers and possibly co-infection with Lyme, but he may have had another infectious process.
Posted by Humane Medicine Hui at 6:27 PM 2 comments:

The dermatoscope is a source of endless wonder.  Here are two cases seen in the past week.

1. Congenital Nevus of Special Site
This 5 month old bi-racial (Black/Caucasian) foster infant was noted to have a slowly enlarging pigmented lesion in his left crural fold since around one month of age.

Question/Comment: Would anyone do anything other than follow this child?  Is the gray veil significant? The symmetrically distributed brown clods are to my mind markers for a benign growing nevus (cobblestone pattern).  There is no pertinent literature about growth in small congenital nevi.  Melanoma, in this age group and ethnicity, is exceedingly rare.

2. Unusual Subungual Hematoma
A 72 yo woman noted nail pigmentation that appeared shortly after knee replacement surgery.  I do not know if she had been anticoagulated after surgery, but the information would help.  The subungual color under the cuticle may be an example of a "pseudo-Hutchinson sign." 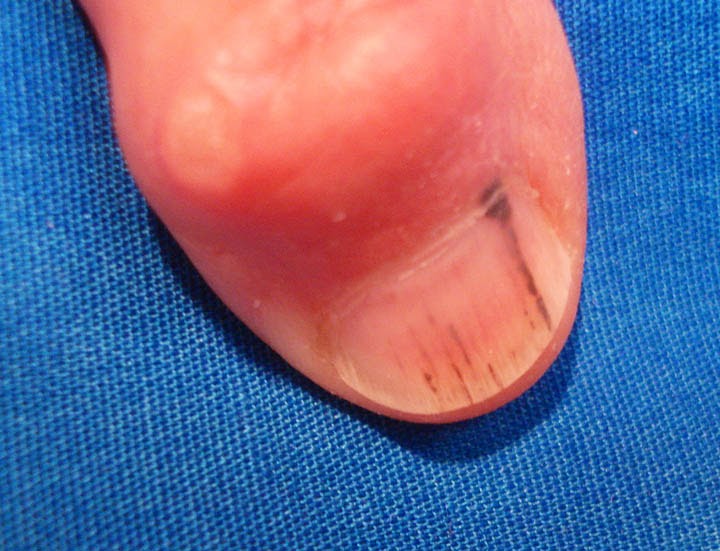 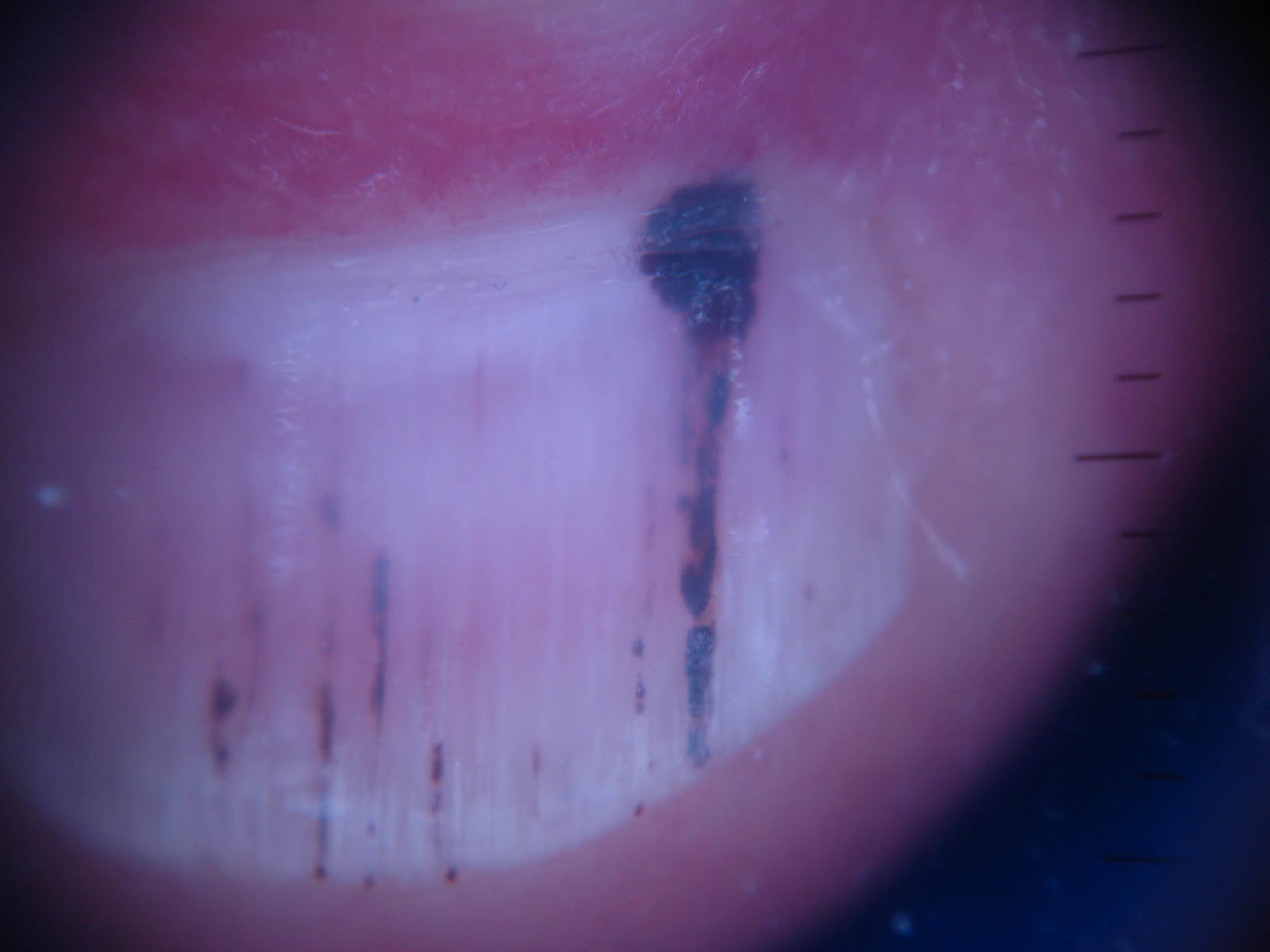 Question/Comment: The fact that this appeared shortly after surgery strongly suggests trauma rather than neoplasia.  If the patient was anticoagulated during surgery, that would be one more helpful historical fact.  The pattern of the long band could be called the "tadpole sign" -- I wonder if it is specific for subungual hematoma.

3. Overview of Nail Dermatoscopy
Posted by Humane Medicine Hui at 9:55 AM No comments:

Please save the dates for one or both of our 2015 Hot Spots programs. 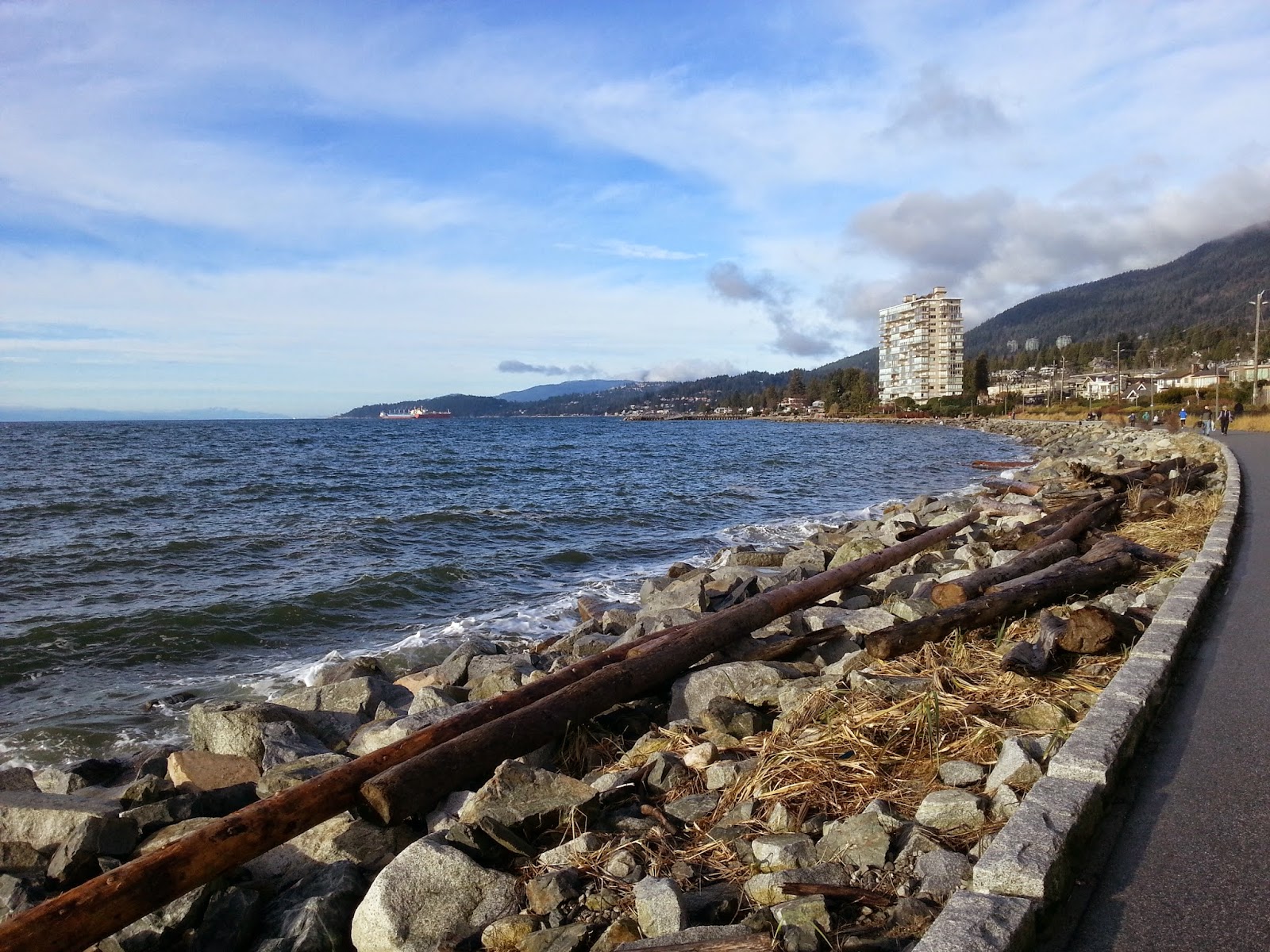 1. Hot Spots 2.0  June 6 - 7, West Vancouver British Columbia
This is a weekend conference that is being held just before the World Congress of Dermatology meeting in Vancouver that starts on June 8.  We will  gather in West Vancouver for a meeting free from the trappings of the Medical-Industrial-Academic complex. 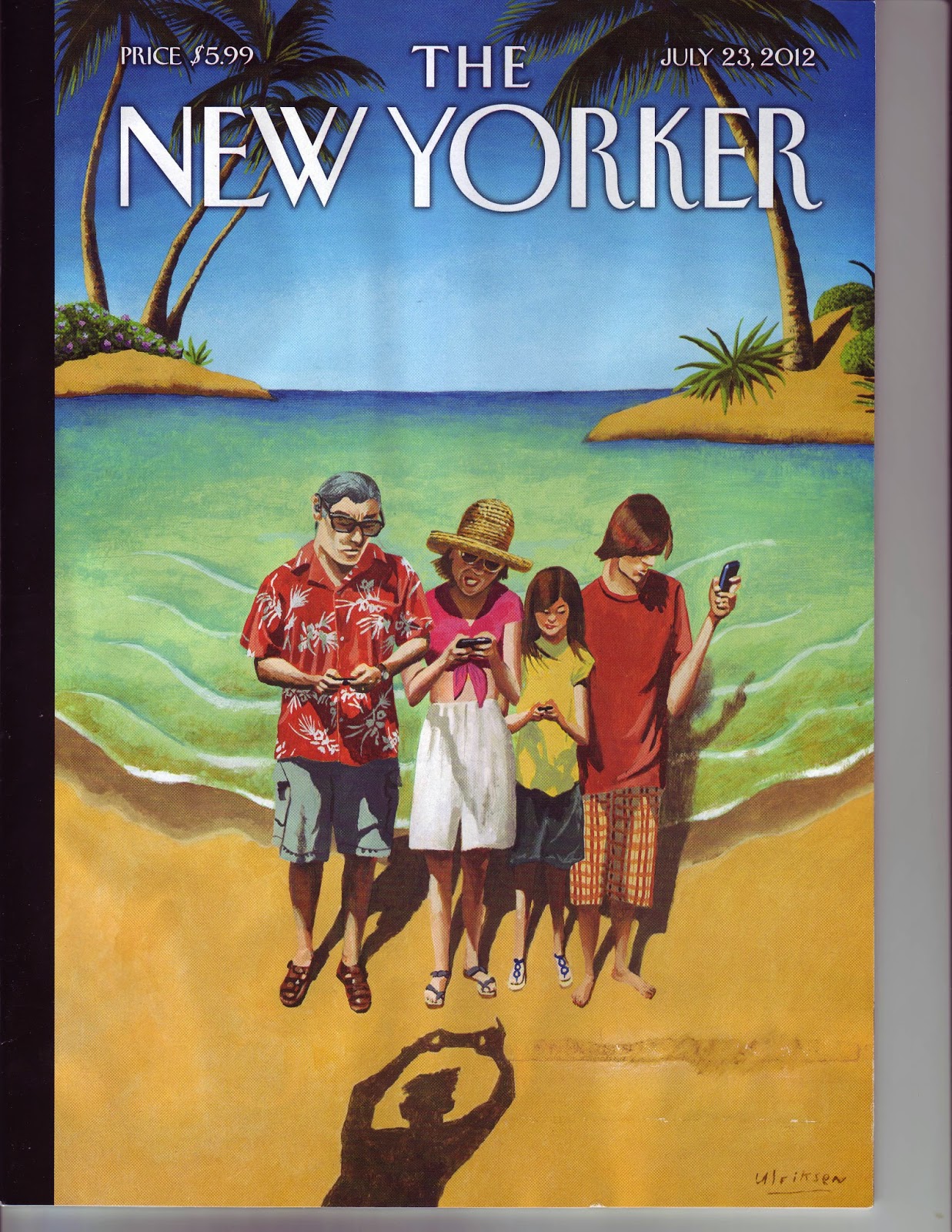 2. Hot Spots in Dermatology August 21 - 23, 2015, Turtle Bay, Kahuku, Oahu, Hawaii
This annual conference was inaugurated in 1987, and has been evolving ever since. Presently it has become an ohana.


Most of the pertinent material is on our Hot Spots websites.

Hot Spots Hawaii Turtle Bay, Oahu
Either of these programs will be both personally and professionally rewarding.  Please try to join us!
Posted by Humane Medicine Hui at 7:45 PM No comments:

This is a valuable reference on nail dermoscopy. It is available free full text online.

Haenssle HA et al. When all you have is a dermatoscope-start looking at the nails. Dermatol Pract Concept. 2014 Oct 31;4(4):11-20.
Abstract: Pigmented and non-pigmented nail alterations are a frequent challenge for dermatologists. A profound knowledge of clinical and dermatoscopic features of nail disorders is crucial because a range of differential diagnoses and even potentially life-threatening diseases are possible underlying causes. Nail matrix melanocytes of unaffected individuals are in a dormant state, and, therefore, fingernails and toenails physiologically are non-pigmented. The formation of continuous, longitudinal pigmented streaks (longitudinal melanonychia) may either be caused by a benign activation of matrix melanocytes (e.g., as a result of trauma, inflammation, or adverse drug reactions) or by a true melanocytic proliferation (e.g., in a nevus or melanoma). In general, non-continuous nail alterations, affecting only limited parts of the nail apparatus, are most frequently of non-melanocytic origin. Important and common differential diagnoses in these cases are subungual hemorrhage or onychomycosis. In addition, foreign bodies, bacterial infections, traumatic injuries, or artificial discolorations of the nail unit may less frequently cause non-continuous nail alterations. Many systemic diseases that may also show involvement of the nails (e.g., psoriasis, atopic dermatitis, lichen planus, alopecia areata) tend to induce alterations in numerous if not all nails of the hands and feet. A similar extensive and generalized alteration of nails has been reported after treatment with a number of systemic drugs, especially antibiotics and cytostatics. Benign or malignant neoplasms that may also affect the nail unit include glomus tumor, Bowen's disease, squamous cell carcinoma, and rare collision tumors. This review aims to assist clinicians in correctly evaluating and diagnosing nail disorders with the help of dermatoscopy.
Posted by Humane Medicine Hui at 8:32 PM No comments:

A 35 year-old woman was seen for a dermatitis on her left arm. She has a history of severe reactions to poison ivy.   Five months ago, she developed an extensive contact dermatitis of her arms and torso that was felt to be secondary to poison ivy.  At the time, she was in the early third trimester of pregnancy and did not wish to use any topical steroids.  The process was mostly resolved when she gave birth around two months ago.


Ohtaki N, et. al. Delayed flare-up reactions caused by jellyfish. Dermatologica. 1986;172(2):98-103.
Abstract: Four patients had a recurrence of cutaneous lesions 1 week after being stung by jellyfish. Three patients had flare-up lesions after only one exposure to jellyfish. All of the recurring lesions were vesicular erythema, and the histological findings of case 3 corresponded to that of allergic contact dermatitis. [This is not all that similar; but it is of interest.]
Posted by Humane Medicine Hui at 8:48 PM 2 comments: