HPI: An  72-year-old Indian housewife present with a pigmented growth on the right sole for a year.  Started as a small growth and gradually increased in size.  She saw a GP earlier and was advised to remove it. However she was not keen then.  Recently she felt pain when she walked and this prompted her to seek medical attention again.

O/E: An ulcerated pigmented warty growth 2 x 3 cm on the sole of the right foot with surrounding pigmented satellite lesions.  Her regional nodes
(popliteal and inguinal) were not enlarged. 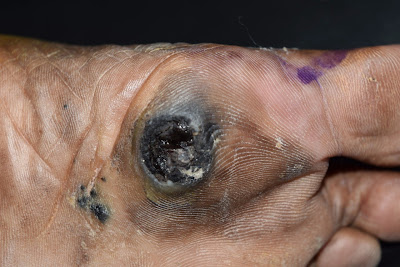 Pathology:
Nests of atypical cells are seen in the epidermis and dermis. Most of the cells contain melanin pigment. They show pleomorphism, have vesicular nuclei and eosinophilic cytoplasm. These features are suggestive of malignant melanoma. Suggest wide excision for definite diagnosis.

Questions:
How would you approach this patient?
Do you think Sentinel Lymph Node Biopsy is important in her case?
What would give her the best quality of life?
After surgery, is there a role for topical imiquimod?

Reference:
1) Kanzler MH. Sentinel node biopsy and standard of care for melanoma: a re-evaluation of the evidence. J Am Acad Dermatol. 2010 May;62(5):880-4.
"There is probably no more controversial area of melanoma management than sentinel node biopsy.  Patients are routinely offered this procedure as if it improves outcome; which it emphatically does not."  See:  Dermatology Central for link to article.

Clin Exp Dermatol. 2015 Jan;40(1):27-30.
Savarese I, et. al.
Abstract: An 85-year-old woman presented with a lesion on the sole of her right foot, which was histologically confirmed as acral lentiginous melanoma. Because of the large field involved and because the patient refused any invasive or painful treatment, topical treatment with imiquimod was commenced. At the 20-month follow-up, the patient was still continuing treatment with topical imiquimod, and no metastases to the lymph nodes or viscera were found, either clinically or in imaging studies. We believe that the success of the treatment cannot be explained only by the stimulation of the immune system induced by imiquimod. A possible explanation might be 'tumour dormancy', where a tumour grows very slowly because of a balance between the neoplasia and the immune (and nonimmune) mechanisms of tumour control. The use of imiquimod has so far allowed our patient to avoid surgery, and perturbation of the mechanisms of tumour regulation, such as local immunity and angiogenesis, has not taken place.

The patient is a 23 y.o. man with a 3 month history of an eyelid dermatitis.  He was treated with a topical corticosteroid and a topical antifunal.  Neither was effective.  Personal history is significant for Crohn’s disease (in remission for years with 6-mercaptopurine).  His father has rosacea.