HPI: A 58 year old patient developed sudden heart infarction that needed urgent bypass heart surgery in March of 2009. Left saphenous vein was used as graft. The patient was otherwise healthy apart from developed a rash on the left leg along the incision scar. The rash is nonpruritic and red in color ranging in size from pinpoint to 2 cm in diameter. This gradually enlarges in size and stop, then slowly resolves without therapy leaving residual pigmentation or scar within few weeks. The rash appear only on one side of the incision but never cross. The patient's medications include simvastatin and lisinopril therapy.

On examination: 2 red patches appeared 15 days ago. They were scaly and psoriasiform from about 1 cm to 2 cm in diameter. Within 2 days they started to resolve, losing their scales and becoming dusky red in color. In addition,there are numerous small varicosities along the legs and feet.

Biopsy could not be done for fear of developing a leg ulcer.
Lab: All investigations are normal including blood picture,ESR and biochemistry. 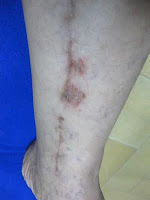 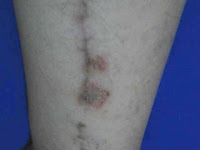 Discussion: I have not seen any case similar to this patient. So I wonder if this is what has been rarely reported in the literature. (see reference) I am waiting my colleagues comments.

Arch Dermatol. 1993 May;129(5):609-12.
Saphenous vein graft donor site dermatitis. Case reports and literature review. Hruza LL, Hruza GJ.Division of Dermatology, Washington University School of Medicine, St Louis, Mo.BACKGROUND--Coronary artery bypass grafting for atherosclerotic heart disease is commonly performed throughout the world. Complications of coronary artery bypass grafting include saphenous neuralgia due to injury to the saphenous nerve duringharvest of the saphenous vein. Dermatologic complications of coronaryrevascularization are infrequently reported and include an eruption overlying the vein donor-site scar. OBSERVATIONS--We describe two cases of saphenous vein donorsite dermatitis associated with sensory peripheral neuropathy in the distributionof the dermatitis. Histopathologic studies revealed a subacute spongiotic dermatitis. The course of the eruption was characterized by exacerbations and remissions with gradual resolution of both the dermatitis and neuropathy over a1- to 2-year period. CONCLUSIONS--Our cases are unique because the dermatitis developed in the area of the neurologic changes. We propose that the dermatitis may be a trophic change secondary to saphenous neuralgia.

Posted by Humane Medicine Hui at 1:16 AM 5 comments: