An Infant With Uncontrolled Itching

The patient is a 6-month-old infant who presents with a history of “eczema” since age 3 months.

The parents’ main concern is uncontrolled rubbing and scratching.  He lives with his parents.  They have a dog (a Yorkie) and 2 cats.  His mother had eczema as a baby in Brazil and her sister has atopic dermatitis.  His aunt's eczema is still quite active although the mother is doing better.  She does, however, have respiratory allergies and is on immunotherapy per allergist.

They are using hydrocortisone 2.5% cream as necessary, avoiding bathing as much as possible, and have found that Vaseline seems to work the best.  The real problem is that Vinny rubs and scratches his skin daily.

On one occasion, when the dog licked him, he developed contact urticaria, which lasted a few minutes and disappeared, but the dog licks him all the time and mostly there have not been problems.

EXAMINATION:  The examination shows a pleasant, well-cared for infant.  He has a suggestion of Dennie-Morgan folds.  His skin is generally xerotic but there is no acute crusting. There are some mildly erythematous patches.  Otherwise, the exam was unremarkable. Photographs were taken.

IMPRESSION:  Generalized pruritus in an infant.  He has little in the way of skin findings.  Relatively strong family history of eczema.  Animals at home.  The child was bottle-fed.  The parents have tried many different types of formula and present he is on Similac. He is eating solids, but problem began before that.

The main problem is how to control his itching since this leads to rubbing and scratching.

1. Should one consider alternative diagnoses?

Is there a role for lab tests?  CBC, CMP, IgE, others

2. What is the role of allergy testing at age six months?

3.  Should antihistamines be prescribed, and it so what is your choice for an infant?

In June of 2019 we presented a 26 yo man whose main problem was scrotal lymphedema related to hidradenitis supprativa (HS). In 2018, he had surgery at a major academic center to excise active HS lesions in both crural folds.  The operative report states that 20x8 cm were excised from the right groin and 20x6 cm from the left groin. This seems to have been antecedent to the development of scrotal lymphedema. His HS been recently managed with adalimumab, 40 mg per week. Gradually, the active inflammatory lesions have improved, although he still has some fistulous drainage.

His main problem now is a buried penis. It’s interesting how he has adapted to this. The patient is reclusive. He lives with his parents and spends his days playing video games. When discussing these he displays a vast, enthusiastic knowledge.

He is very anxious about spending time in hospital and prefers to stay home where his attentive parents care for him.

We are presenting him to discuss "the buried penis," an unusual disorder, and to see if anyone has helpful suggestions. There were some recent in-depth reviews of “the buried penis” and we will see if the authors are interested in commenting. 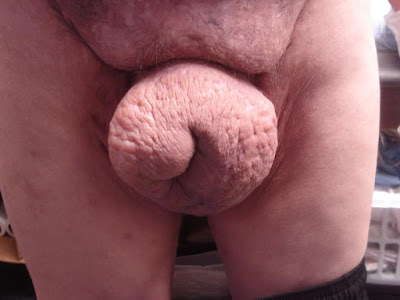 Note:  It appears that there are surgical approaches that can help patients like this, but only a very small number of urologic or plastic surgeons have the interest and expertise in this topic.  Dr. Joel Gelman (see articles referenced below) kindly discussed the management of massive scrotal lymphedema  with me   He related the case of Wesley Warren whose 132 pound scrotal lymphedema he removed in 2013.
Reference:
1. Evaluation and management of adult acquired buried penis. Ho TS, Gelman J. Transl Androl Urol. 2018 Aug;7(4):618-627. Free Full Text.
2. Reconstruction of Massive Localized Lymphedema of the Scrotum: Results, Complications, and Quality of Life Improvements. Wisenbaugh E, Moskowitz D, Gelman J. Urology. 2018 Feb;112:176-180. Conclusions: Surgical treatment of MLL of the scrotum can be performed successfully for masses even up to 61 kg (134 lbs). Short-term wound complications are common, but subjective QOL scores improve dramatically. Despite expectations, most patients gained weight after mass removal, which indicates that they would benefit from a comprehensive weight loss plan that includes, but is not limited to, scrotal surgery. Free Full Text.
3. Various YouTubes of Wesley Warren's surgery can be found online.