Erosive Pustular Dermatosis of the Scalp

The patient is an 81 yo man with a long history of chronic lymphocytic leukemia.  His white counts are ~ 130,000 and platelets ~ 60,000.  He has had scores of nonmelanoma skin cancers (mostly squamous cell carcinomas) on the head and neck, torso and  all four extremities.

He presents with yellow-brown crusts over his bald pate.  These have a mousy, earthy odor.  They were gently debrided and the subjacent areas were erosions. 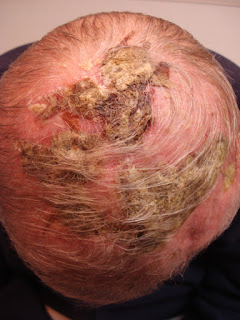 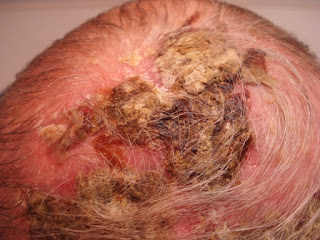 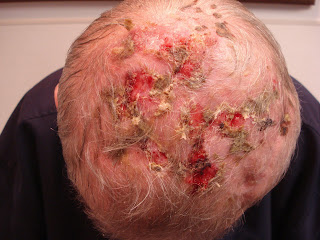 Plan:
References:
Abstract: Erosive pustular dermatosis (EPD) is a rare condition of the scalp and legs that is marked by crusted erosions or superficial ulcerations that may result in scarring alopecia and chronic wounds. The condition predominantly affects elderly female as compared to male patients. Its pathogenesis remains poorly understood. The majority of the cases in the literature are from the United Kingdom and continental Europe. In this series, we present 8 North American patients with EPD of the scalp, one of whom also had involvement of the legs and another with the involvement of the face. All our patients were advanced in age and had a predisposition to chronic actinic damage, which are common characteristics of EPD previously reported in the literature. We hypothesize that immunosenescence leads to an aberrant immune response to wound healing and, along with other factors such as a loss of the normal epidermal barrier, ultraviolet damage, and hormonal factors, may contribute to the development of this condition.

2 Wilk M1 et. al. Erosive pustular dermatosis of the scalp: reappraisal of an underrecognized entity. J Dtsch Dermatol Ges. 2018 Jan;16(1):15-19.
Abstract: Erosive pustular dermatosis of the scalp (EPDS) is an inflammatory dermatosis of unknown etiology. Herein, we present a review of the disease and report our own clinical and histopathological experience in eleven patients. EPDS tends to spontaneously affect bald areas of the scalp in elderly individuals. A history of previous surgery at the same site - as observed in four of our patients - is common. Coronary artery disease, cerebrovascular insult, arterial hypertension, diabetes mellitus, and severe cases of cancer were frequent comorbidities. Most patients show an undulating clinical course despite topical anti-inflammatory treatment; in some individuals, the lesions heal with scarring. Histopathology reveals scaly crusts or erosions and granulation tissue-like changes in the dermis, evolving into a scar in more advanced stages. Apart from actinic/local damage, impaired immunity and microcirculation may be predisposing factors of the disease. Similar to pyoderma gangrenosum, EPDS must be considered in the context of nonhealing wounds in the elderly after the differential diagnoses mimicking EPDS have been ruled out. Given that previous or concomitant adjacent basal cell or squamous cell carcinoma is a common finding and that infiltrative variants extending beyond the clinically visible tumor may occur, histological mapping of the surrounding skin may be advisable in doubtful cases.
Posted by Humane Medicine Hui at 8:46 PM No comments: