Does this ring a bell?

Shs is having the second episode of a painful erythematous eruption on the dorsum of the left foot. The first episode, two months ago, resolved after two weeks of Keflex and Bactrim.

O/E: This is an upbeat but chronically ill woman. The pertinent findings are on the legs. There is dusky erythema on the dorsum of the left foot. In addition, there are petechaie on both lower extremities. She has a 2/6 pansystolic murmur which the rheumatologist feels is cardiac but her nephrologist feels radiates from her dialysis shunt (left arm). 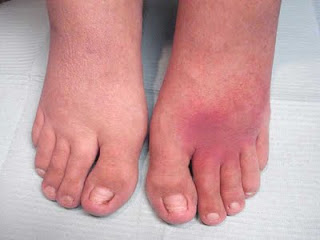 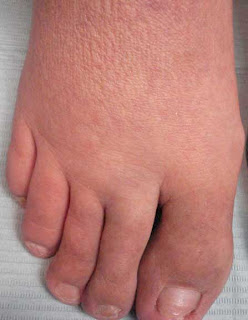 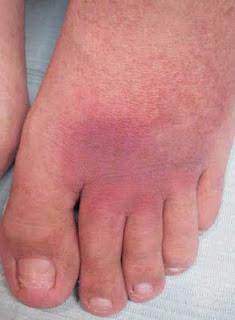 Impression: Second episode of an erythematous process left foot. Although this was treated initially as "cellulitis" no real evidence of infection. This does not look infectious to me. I wonder about an embolic phenomenon. I know I have not seen this before.

Questions:
What is your presumptive diagnosis?
What more would you do at this time?
(On thinking about this patient, and the recurrence, the question of Fixed Drug Eruption arose. I will question her about intermittent prescription and OTC drug use.)

I will give F/U re: bx findings.