HPI: The patient is a 66-year-old retired elementary school teacher who was seen for evaluation of chronic leg ulcers. The most recent injury was sustained on her right lower leg when she bumped into her grandson’s toy.  This  eventually caused a new leg ulcer. Subsequently, she was hospitalized, and seen and evaluated by the Plastics Wound Clinic at a major hospital center. The patient presented for continuity care after discharge from the hospital.  Her chronic leg ulcers started in 2011 when she had a cat scratch on the right foot which resulted in cellulitis and ulcer on the right leg. After that episode, she noticed the development of ulcers whenever she gets even minor injury to her legs. She has a long history of rheumatoid arthritis that she has been on multiple treatments including prednisone, methotrexate and Remicade. Her current medications include prednisone 5mg daily, methotrexate 20mg weekly with folic acid, Celebrex 200mg bid, and oxycontin 50mg daily. 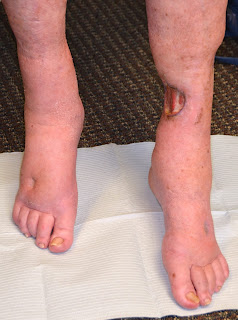 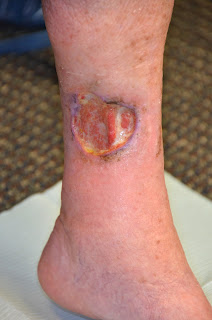 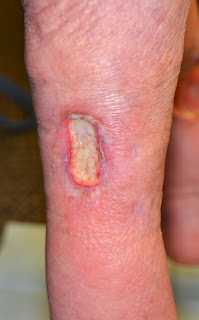 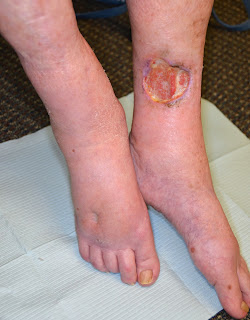 Hospital Courses:
1. Diagnosis: Her chronic ulcers were considered to be multifactorial. Likely contributors include trauma, infection, rheumatoid arthritis, venous insufficiency, ulceration from methotrexate toxicity.
2. Procedures: Debridement and Kenalog injection(10mg/cc) to the left medial calf
3. Diagnostic Studies: Wound culture (pending)
4. Dressings: Acticoat 7 for lesions A and D, and then continue hydrofera blue to lesions A and D. Santyl, adaptic, gauze, kerlex for lesions B and C.
5. Compression: Soft cotton between the skin and the SurePress; will try penumoboots for home and leg elevation.

Discussion: The possible etiologies can be trauma, rheumatoid arthritis, venous insufficiency, infection, or prolonged use of methotrexate or Remicade. There are 9 reports of ulcerations from methotrexate and 1 report of ulcerations  of foot from Remicade (infliximab) according to Litt’s DERM Drug Eruptions & Reactions Manual. There are two major questions. What is (are) causing these ulcerations which occur with even minor injuries? Could it be methotrexate toxicity? Could this be a variant form of pyoderma gangrenosum related to RA? She does not heal well even in other locations of her body. It seems to be more than just venous insufficiency. Lastly, how can we help heal these ulcers?

Questions:
What are your thoughts regarding the etiology of this woman's leg ulcers?
How would you manage her to facilitate healing?
Do you think her medications play a role?  or her rheumatoid arthritis?

3. Seitz CS, Berens N, Brocker EB, et al. Leg ulceration in rheumatoid arthritis -- an underreported multicausal complication with considerable morbidity: analysis of thrity-six patients and review of the literature. Dermatology. 2010; 220 (3): 268-73
CONCLUSIONS: The majority of leg ulcers in patients with RA are due to underlying venous/arterial malfunction while vasculitic or traumatic ulcers are less common. Additionally, we identified a relevant subgroup of patients with 'inactivity ulcers' due to impaired mobility and consecutive lymphedema. Morphology and localization of ulcerations as well as duplex sonography provide the most important clues for accurate diagnosis, ensuring adequate treatment.