65 yo woman with nodulo-ulcerative leg lesions

HPI:  This 65 yo woman has had leg lesions for ~ four years.  Initially, papules and small nodules. Over the past few months a number of these have become ulcerative.  She had lymphadenopathy two years ago and a lymph node biopsy was interpreted as sarcoidosis.  Her CXR was normal and no treatment was rendered, 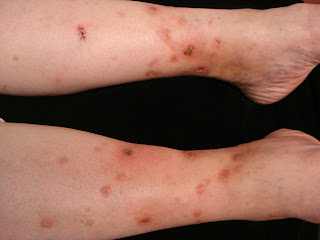 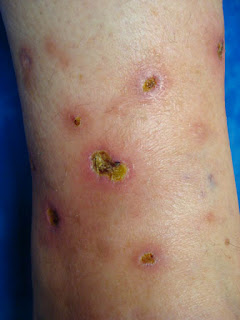 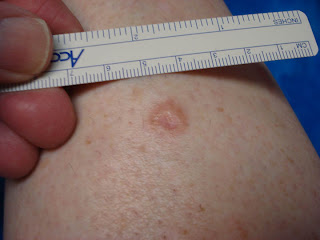 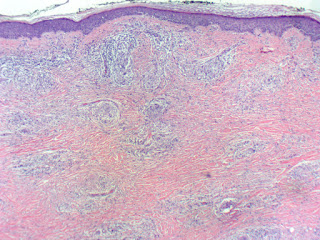 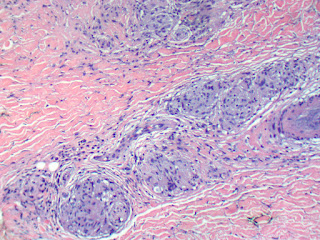 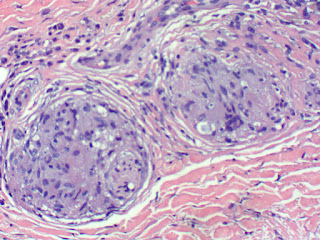 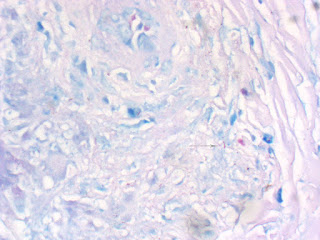 Diagnosis: Necrobiosis-like variant of sarcoidosis.  What is the significance of rare AFBs?  She will have PPD and work-up to rule out TBC.

Questions:  Do you have alternative diagnoses? How would you treat her?

A 62-year-old woman with systemic sarcoidosis developed erythematous plaques on her lower legs. Clinically, two kinds of skin lesions were distinguished; one type formed brownish-red plaques with induration suggesting plaque-type skin sarcoid, and the other formed purplish erythematous plaques with atrophic centers resembling necrobiosis lipoidica. In spite of this clinical appearance, a biopsy specimen from one of the latter lesions revealed typical skin sarcoid histology composed of discrete non-caseating granulomas, while that from one of the other lesions showed necrobiotic changes of collagen bundles surrounded by epitheloid histiocytes and foreign-body giant cells. Because cutaneous involvement of sarcoidosis may mimic necrobiosis lipoidica clinically and/or histologically, we diagnosed her skin lesions as necrobiosis-like skin sarcoid.

2. Histologic observations of variably acid-fast pleomorphic bacteria in systemic sarcoidosis: a report of 3 cases.
Cantwell AR Jr. Growth. 1982 Summer;46(2):113-25.
Abstract: Tissue sections of skin and lymph nodes from three consecutively diagnosed cases of systemic sarcoidosis were studied for the presence of acid-fast bacteria, utilizing routine and acid-fast staining techniques recently recommended for the demonstration of cell-wall-deficient bacteria (L-forms). Evidence of variably acid-fast cocco-bacillary forms was present within the biopsy material of all the patients. The combined findings of variably sized, predominantly coccoid forms, along with larger forms resembling L-form "large bodies," and short acid-fast rods all suggest that cell-wall-deficient bacteria (possibly related to the mycobacteria or corynebacteria) may be present in cases of sarcoidosis.
Posted by Humane Medicine Hui at 12:30 AM 7 comments: