Atypical plaque on the hand

An 80-year-old retired goldsmith presented with 4-month history of an ulcerated plaque on the left hand. It had gradually increased in size. His past medical history included hypertension, diabetes mellitus, and ischemic heart disease. His medications included norvasc, zocor, ticlid and amaryl.

Examination of the skin showed a localized ulcerated verrucous plaque 6 x 6 cm on the dorsum of the left hand. Closer examination showed slough and blackish dots on the surface of the plaque. Regional nodes were not enlarged. 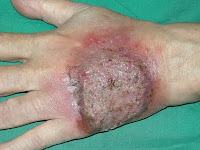 Our presumptive diagnosis is either atypical mycobacterium infection or chromoblastomycosis.

The epithelium shows pseudoepitheliomatous hyperplasia. The upper dermis is densely infiltrated by acute and chronic inflammatory cells. Neutrophils are also noted in the lining epithelium. No granulomas or Langhan's giant cells are seen. No microorganisms are noted. Negative for dysplasia and malignancy. Ziehl-Neelsen stain for acid fast bacilli is negative. Periodic acid Schiff stain for fungi is negative. Culture for AFB and fungal organism were negative 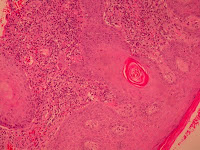 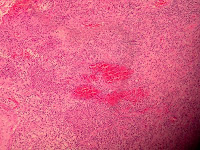 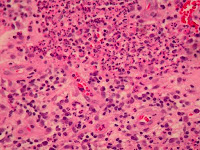 One of the differential that was considered is pustular vasculitis or neutrophilic dermatosis of the dorsum of the hands. Points supporting this diagnosis include pseudoepitheliomatous hyperplasia and the absences of granuloma on histology examination.

I suspect this could be atypical mycobacterium infection based on the empirical therapeutic response to bactrim. I wonder what your views are with regard to this case? 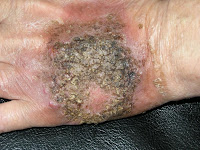 History: The patient is a 63 year-old Japanese-Hawaiian woman who plays Taiko drums as a hobby. She has a past history of porphyria cutanea tarda (PCT) from estrogens which is now quiescent. A few years back, she developed tendonitis of her wrists and received cortisone injections near each wrist from two different physicians. When she developed a hypopigmented patch of skin on her right forearm she attributed it to the cortisone injection. The patch was characterized by an large, flat, smooth area of hypopigmentation, and occasionally some round, bright red spots appeared in the hypopigmented area. They would disappear after a week or two. She consulted a dermatologist a year ago because she worried that this might be contagious. He diagnosed tinea, but did no KOH prep and she has been faithfully applying clotrimazole ever since, but without relief. The dermatologist also raised the spectre of Hansen's Disease which worried the patient, a retired public health nurse, greatly. She does not have any known skin problems elsewhere on her body at this time.

On Examination: The patch is now predominately reddish in color, with sharp irregular borders. The skin is fragile in the sense that if she hits her arm against something, it will break and take a while to heal. - similar to what used to happen way back when she had PCT. This only occurs in the localized area of hypopigmentation. 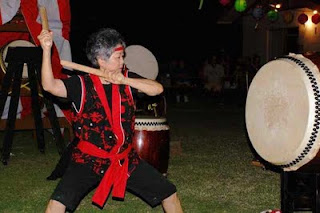 Discussion: This case presentation contains some interesting points. The patient is a late middle-aged Japanese-Hawaiian woman who has lived in the sub-tropics for her entire life. Thus, she has a fair amount of solar elastosis. The intra-articular corticosteroid most likely caused more localized atrophy and the trauma the arm experienced doing heavy drumming was all she needed to cause purpura. The diagnosis of tinea without a KOH prep showed a certain cavalier approach on the part of her practitioner; and the suggestion of the possibility of Hansen's Disease should not have been made unless a biopsy followed. Leprosy in economically comfortable people born in Hawaii is very unusual. Most cases seen in the Hawaiian Islands today are in immigrants from the Philippines, Oceania and Southeast Asia. Purpura is not a usual finding, but rather a hypopigmented anesthetic plaque (tuberculoid leprosy). Lepromatous leprosy would often appear more dramatically. The patient's PCT is likely not related, but she should have regular liver function studies and ferritin levels looked at. In the absence of other findings urinary porphyrins may not be necessary. "Percussion Purpura" while likely not super rare, has not been reported before.

Comments: Your thoughts and questions will be most welcome.
Posted by Humane Medicine Hui at 10:09 AM 3 comments: