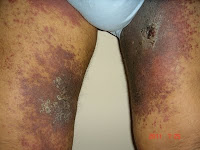 Omid Zargari, a dermatologist from Rasht, Iran, is asking for your help regarding a 74 year old man with extensive Kaposi's sarcoma after renal transplantation. The disease began about two years ago, when he was on Cyclosporine (plus prednisolone). At that time, I asked the nephrologist to change CsA with Sirolimus. Now, he's on Pred+cellcept+sirolimus.
I've seen several cases of post-transplant KS. All of them regressed after discontinuing CsA and haven't seen a case with such extent. HHV8 screening is not available here. I referred him to an oncologist, but he refused to start any chemotherapy because he believed this is not a life-threatening condition....considering the amount of impact the disease has put on the QOL of this gentleman, he is seeking for any help...at least a palliation.
What do you suggest?

The patient is a 15 yo girl with a 2-3 year history of painful thumbs. The palmar surface of her thumbs were glazed with decreased fingerprint markings. She has mild hyperhidrosis palmaris. One great toe has mild plantar hyperkeratosis but is not glazed like the thumbs. I noticed a cell phone in her back pocket and asked her to show me how she uses it (see below). She's had this for three years. Her father said she's on the smart phone for hours a day.
Is this a new entity? Contact? Irritant? Repetitive Trauma? Comments? 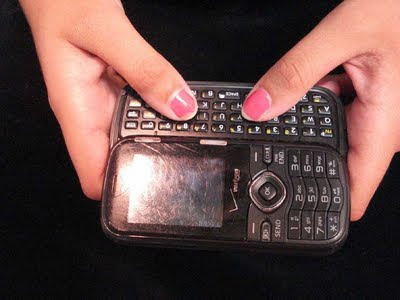 Posted by Humane Medicine Hui at 9:43 AM No comments: