Abstract: An 84-year-old elderly woman with 3 months history of pruritic skin eruption
History: The patient is an 84-year-old nursing home resident who presents for evaluation  of pruritic skin eruption for the past three months. She first noted pruritic lesions on her hands when she was in a hospital for a back surgery. Since then her skin was progressively worsening and the eruption spread to her face, arms, abdomen and legs. She notes she was getting thick scales in the involved areas. She has chronic back pain and has gone through several operations past 3 months. Her other medical history includes congestive heart failure, hypertension, and COPD. Due to pain and her recent skin eruption, she has been taking prednisone, hydromorphone, doxepin, and Ativan. She feels sedated and confused at times. The patient is with her daughter who had significant contact and similar symptoms. 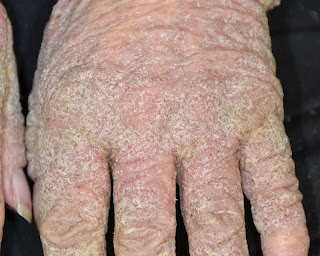 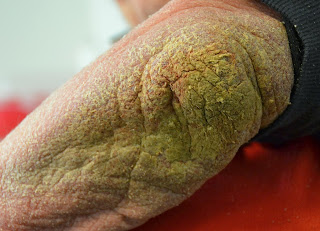 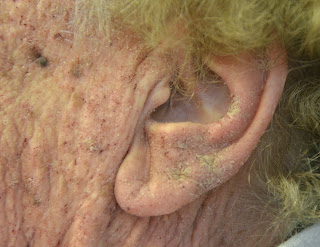 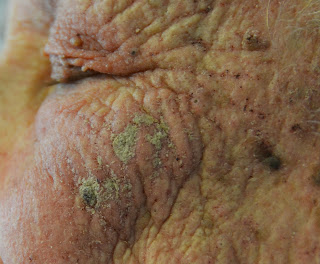 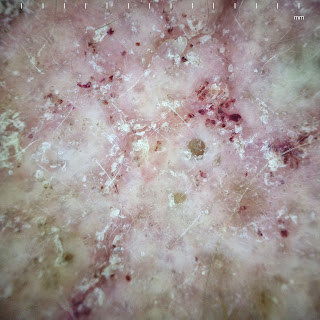 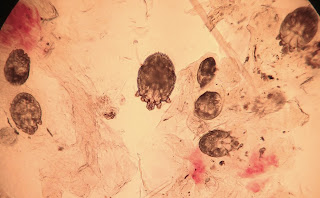 Questions: We'd appreciate your recommendations on this patient's care.

Discussion: Crusted Norwegian scabies is an uncommon hyperkeratotic variant of scabies infestation. Norwegian scabies are known to be as opportunistic pathogens. Our patient has been under significant stress physically and emotionally due to recent back surgeries and her skin eruption has progressed under the eyes of a medical staff.  Her medications contributed to the development of Norwegian scabies by suppressing her immune response (prednisone) and blunting her itch perception (Dilaudid, doxepin and Ativan).  In a way, this was a perfect storm.   Due to severity of involvement, the patient will be treated with oral ivermectin 200 micrograms per kilogram weekly for 3 weeks and permethrin 5% cream weekly for 4 - 5 weeks. Her daughter and all close family members will be also treated with topical medication. The nursing home will be informed.  It is estimated that the mite load of patients with Norwegian scabies can be as high as 15 million which accounts for the  highly contagious nature of this variant.  All of the staff and residents of her nursing home should receive scabies treatment.