Facial Eruption in a 2 year-old


The patient is a 2 yr and 10 month old girl with a few month history of a facial eruption. It began as hive-like plaques but has evolved over the past few weeks.  Her paternal grandmother has Alpha-1 Antitrypsin disease and the child is a carrier.  No family history of collagen vascular disease.  She takes no medications save vitamins.

EXAMINATION:  The examination shows an erythematous papular and nodular eruption on both malar eminences and the left lower lid.   The remainder of the cutaneous exam is unremarkable. 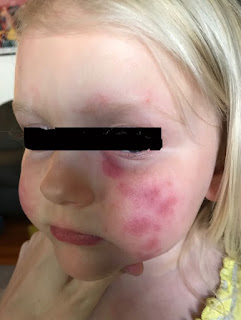 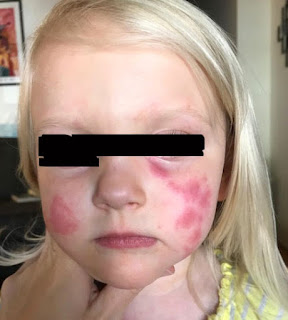 Pathology:  The slides were read by Deon Wolpowitz and the photmicrographs were taken by Erin Tabata, both of Boston University Department of Skin Pathology.
Intermittent compact hyperkeratosis with parakeratosis, intermittent basal layer vacuolization with squamatization of the basal cell layer and occasional individually necrotic keratinocytes and mild lymphocytic exocytosis, papillary dermal edema that is focally prominent in a few papillae, ectatic blood vessels, and a moderate superficial and deep perivascular and interstitial, and focally periappendageal, lymphohistiocytic infiltrate with few extravasated erythrocytes. 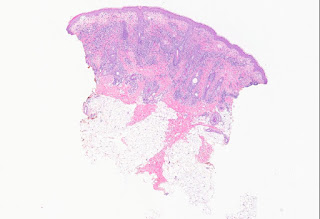 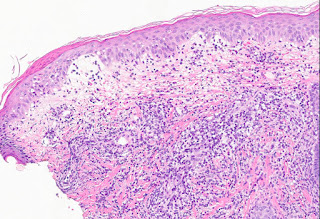 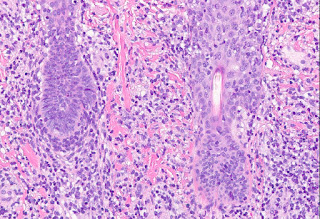 Diagnosis:  Polymorphous Light variant.  This is not the common papulovesicular variant of PMLE.

Plan:  Initially, she will use broad-spectrum sun-blocks containing zinc oxide or titanium dioxide and a large floppy hat whilst outdoors.  As the season changes, and the light wanes, she should improve.  Topical corticosteroids, calcineurin inhibitors, and hydroxychloroquine will be considered if her parents want further therapy.  Phototesting at a centre is disruptive for this child, at this time.

What are your thoughts.

85 yo man with sinus tracts for diagnosis

The patient, an 85 yo man with no known past medical history, presented to our OPD with large lesion with sinuses tracts on back since past 4 years.

The lesion appeared as small sinus tracts with swelling over the right sided back.  These were pruritic in nature with  slowly & progressively increasing in size over 1 year & the lesion has not increased in size since past 3 years.   There was no history fever or cough or any other lesions noted.  He is not diabetic nor hypertensive.

No h/o specific medicinal intake or food allergy noted by the patient preceding the back lesion.

On examination:
A large lesion of approx 25 x 15 cm in size papular in nature with multiple discharging pustules noted over the same; scratch marks are present..
Swelling firm in consistency; & skin over the lesion is non-adherent to the lesion; Lesion is freely mobile over the base of scapula & muscles. 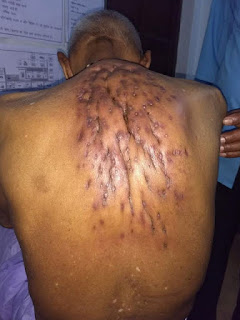 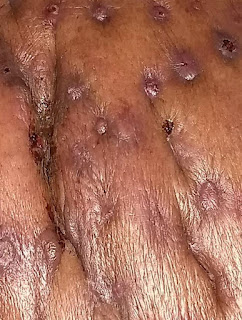 There are no specific systemic finding.

We approached this skin lesion as mycetoma or fungal infection; Scrofuloderma was also one of the D/D. But the skin biopsy revealed “Lobular Capillary Hemangioma.” 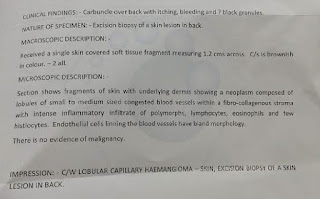 What other D/Ds can this lesion be??

How should we treat such lesion? How long can we treat this patient medically??
What specific counselling in terms of resolution of skin lesion should be done for the patient?
When can we consider surgical option (? wide excision); if any? What are the specific indications of the surgical removal of the lesion?