Abstract:  17 yo girl with 10 year history of thick adherent scales over scalp

HPI:  The patient is a 17 yo girl who has suffered with wide-spread thick adherent scaly concretions over the scalp.  She has been bullied and teased at school for many years, often being called “lice girl” and similar epithets. She has tried many tar shampoos, ketoconazole shampoo, olive oil, and P&S liquid; all without effect.  There is no personal or family history of psoriasis or atopy.

O/E:  She is a well-developed and well-nourished 17 yo with thick chestnut colored hair or normal intelligence.  There are no areas of alopecia. Thick, silvery adherent scales are present on the occipital, parietal and temporal scalp.  When these are removed, hair roots come out, too.  The remainder of the cutaneous examination is normal.  No nail dystrophy.
Photo: 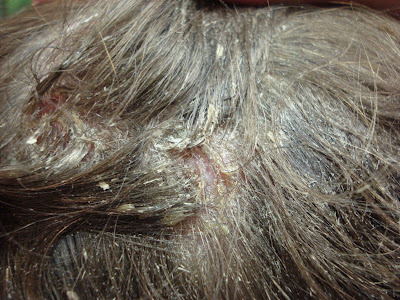 Scalp Biopsy read by Lynne Goldberg (Boston University Skin Path): was felt to be most compatible with psoriasis.  Seborrhea was in the differential diagnosis but less likely.

Diagnosis: Tinea amiantacea, aka Pityriasis amiantace.  In this case, the cause of T. aminatacea was most likley psoriasis.

Discussion:  This 17 yo girl has suffered with what appears to be tinea aminatacea for a decade.  It appears unlikely that this is psoriasis. Tinea capitis has not been ruled out.  I have found KOH preps from the scalp difficult, so did a fungal culture.  Her bacterial culture showed 3+ S. aureus but I suspect this is a secondary invader.  My plan at this time is to treat with two weeks of an antibiotic based on sensitivities, and start on terbinafine pending fungal culture.  If culture negative and if these approaches are not helpful, I may recommend isotretinoin.  The use of this has not been reported for T. aminatacea; but it makes some sense.  The other question I have is whether a scalp biopsy may be helpful.

Dr. Goldberg's rotocol for Scalp Psoriasis, Tinea amiantacea and Related disorders:
1. Wet hair at night
2. Apply Dermasmoothe scalp oil liberally to scalp. Leave on overnight
3. Sleep with this overnight in a shower cap (to protect pillow)
4. Shampoo in the morning with T-Sal or other dandruff shampoo

Do this nightly at first if possible, but after a week or so she will be better and will not need to do it every night.

References:
1. Pityriasis amiantacea: a clinical and etiopathologic study of 85 patients.
Abdel-Hamid IA. Int J Dermatol. 2003 Apr;42(4):260-4.
Abstract
RESULTS: A total of 85 PA patients were collected and studied. Pathological diagnosis of scalp psoriasis was confirmed in 35.3% of cases. Eczematous features suggesting a diagnosis of seborrheic and atopic dermatitis were detected in 34.2%. Diagnosis of tinea capitis, diagnosed by potassium hydroxide preparation, fungal culture, and periodic-acid Schiff staining, was detected in 12.9% of the PA patients. Staphylococcus isolates were detected in 96.5% of the PA patients compared with 15% in healthy persons as the control (P > 0.00001).
CONCLUSIONS: Pityriasis amiantacea represents a particular reaction pattern of the scalp to various inflammatory scalp diseases. The most frequent skin diseases associated with PA are psoriasis and seborrheic dermatitis. It is important to keep the diagnosis of tinea capitis in mind when evaluating PA patients. Staphylococci on the scalp could participate in the pathogenesis of PA.

Posted by Humane Medicine Hui at 9:30 PM No comments:

10 cm annular plaque in a 62 yo globe trotter

The patient is an otherwise healthy 62 yo man with an eight month history of an anympromatic plaque on his right arm.  His work takes him to places like the Atacama desert of Chile, Baghdad and Mosul, Japan, and Indonesia where he repairs specialized equipment in the field.  He was treated in a number of clinics with prednisone, various topical azoles and 40 days of grizeofulvin to no effect.

O/E:  The is a solitary 10 cm ring-shaped plaque on the right arm.  Sensaton to pinprick is normal. 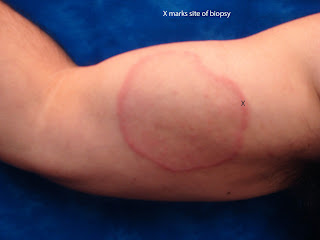 Pathology:  A 4 mm punch biopsy was taken from the border of the ring.

The patient lives in an endemic region for Lyme disease.  His work takes him to Asia, South America, the Mid-East, and all parts of North America. Presently, he is in Iraq and will have a Lyme serology when he returns.  Certainly, the clinical picture could suggest erythema migrans, but an eight month history would be unusual.  There are a host of case reports of IGH in association with arthritis, collagen vascular disease, inflammatory bowel disease and even Lyme disease; but they are hard to make sense of.  (Guilt by association?) Although we see erythema chronicum migrans with regularity in New England, this lesion did not jump out as typical to me; but in retrospect, it could be the interface between IGH, GA and ECM. An old ECM?   Food for thought.  How long will the primary lesion of Lyme disease remain without treatment.  Eight months seems a long time.

Posted by Humane Medicine Hui at 1:18 AM 6 comments:

The patient is a 64 yo school teacher who presents for a white nail.
Anamnesis: "The nail has been white for at least 6 months.  No other fingernails or toenails are white.  I had a ring on that finger that got super tight. I have finally removed the ring.  Sometimes the finger hurts, even now, like it may be arthritic."

The patient's questions are:
Is there something I can do to get it back to being a normal color?
Will it ever go back on its own to being normal - no longer white?

O/E:  The nail of the 4th finger of the left hand is uniformly white.  There is no flaking or friability.  Other than the color, the nail plate looks normal. All other finger- and toenails are normal 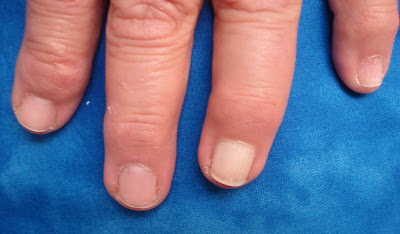 Diagnosis:  Ring finger Leuconycia totalis.  This does not look like superficial white onycholysis.  At the time I saw the patient, I did not think to do a KOK prep since the nail plate looked so normal.

Thoughts: Single-digit leuconychia totalis has not been reported in the medical literature.  It is likely that prolonged ischemia may have played a role.
Dr. Eckart Haneke's comments were helpful: "Single digit leukonychia is just a description of the condition, not a diagnosis. I think this is due to the long-term poor blood supply of the finger. There is no similarity to superficial white onychomycosis. I cannot predict the future development. It may get slowly better, but this will take some more time. If you want to know something more about the situation you need a comparative demonstration of the blood circulation, e.g. by thermography or another similar method, of this and the contralateral finger. Diffuse leukonychia is sometimes seen in Raynaud's and other disturbances of blood supply."

We have come a long way since 1908; yet we still have a long ways to go.
Posted by Humane Medicine Hui at 8:04 PM No comments: