Abstract: 20 yo woman with allergic contact dermatitis to a bracelet purchased at a temple in Beijing

HPI: This young woman purchased some prayer beads at a Beijing temple in early September, 2011. Within two - three weeks she developed a rash under the bracelet. She treated this with a number of topicals including a neomycin containing cream. She was seen in an ER a few days before she presented to my office and started on prednisone and Keflex.

O/E: A well-defined area of resolving dermatitis on left wrist. It appears to have been bullous.

Clinical Photos:
The clinical picture did not come out well. Second picture is of bracelet on unaffected wrist to show how she wore it. 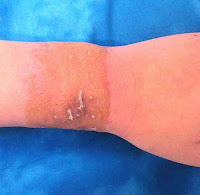 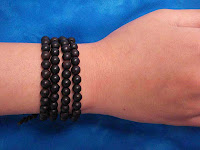 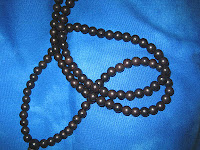 Diagnosis and Discussion: This contact dermatitis is most likely secondary to wooden beads. There are a few pertinent references (see below). The patient also applied neosporin so we can't rule out that this may have played a role. She does not live near my office and is in college far away. My approach would be to treat with a topical corticosteroid and warn her about neomycin. If this recurs she can be patch tested. At this point, I do not know what kind of wood the bracelet is made of. The references I found were mostly about cocobolo wood. This may prove difficult to determine. Your comments will be welcome. Note: A number of our readers favor rosewood as the culprit (see reference # 3)

References:
1. Hausen BM. Allergic contact dermatitis from a wooden necklace. Am J Contact Dermat. 1997 Sep;8(3):185-7.
Abstract
A 36-year-old female kitchenworker twice developed eczematous lesions corresponding exactly to the area around her neck where she had worn a wooden necklace. Contact dermatitis lasted longer than 1 week. The necklace consisted of 42 brown wooden beads and 63 other wooden parts, 0.5 to 3 cm diameter. Most parts could be identified as Cocobolo wood, Brazilian and East Indian rosewood, and teak. Patch tests with the pure constituents gave +3-reactions to three dalbergions and obtusaquinone, which are known to be the sensitizers of Cocobolo and the above-mentioned rosewoods. Because of these test results, the identification of the species by eye examination could be corroborated. Further detailed questioning revealed that the patient had played a recorder, probably made from Cocobolo (Dalbergia retusa), when a child, to which she unknowingly became allergic.


2. Moratinos MM, Tevar E, Conde-Salazar L. Contact allergy to a cocobolo bracelet. Dermatitis. 2005 Sep;16(3):139-41.
Abstract
Tropical woods are highly valued because of their strength, hardness, and resistance to moisture. These characteristics make them easy to work with and extremely durable, and that is why they have been used in the manufacture of wooden jewelry, musical instruments, furniture, and handles of many different objects. We present a case of a 44-year-old man who developed pruritus, erythema, and blistering around his right wrist, corresponding exactly to the area where he had worn a wooden bracelet. Thin-layer chromatography performed with the extract of the shavings revealed (R)-4-methoxydalbergione and obtusaquinone (the main components of cocobolo wood) and (S)-4'-hydroxy-4-methoxydalbergione (in lower amounts). Patch-testing with sawdust from the bracelet resulted in a very strong reaction. Patch tests with the pure constituents yielded +++ reactions to the main sensitizers of cocobolo, including obtusaquinone, but also to sensitizers present in other rosewoods. This last fact can be explained by cross-reactivity between different dalbergiones. Contact dermatitis from tropical woods is more frequent than thought, owing to their high sensitizing properties. An exhaustive search can identify the allergen responsible in many cases.

3. Hausen BM. [Rosewood allergy due to an arm bracelet and a recorder]. Derm Beruf Umwelt. 1982;30(6):189-92. [Article in German]
Abstract
A 40-year-old woman developed dermatitis of the left forearm after wearing a bracelet manufactured from Brazilian rosewood (Dalbergia nigra All.). Swelling of the lips, itching and vesicles recurred when she played a recorder made from the same timber some years later. Epicutaneous tests were strongly positive after 120 h with 2 of the wood constituents: R-4-methoxydalbergione and S-4,4'-dimethoxydalbergione. The third quinone (S-4'-hydroxy-4-methoxydalbergione) only elicited a weak reaction. Shavings of the wooden bracelet extracted with benzene and ethanol and separation of the residues by thin layer chromatography yielded all 3 dalbergiones in remarkable amounts (congruent to 0,8%). Cross-reactions to the chemically near related R-3,4-dimethoxydalbergione, known as the strongest sensitiser of the dalbergione group, were not obtained, although guinea pig experiments had revealed cross-reactivities. Of the racemic
Posted by Humane Medicine Hui at 10:00 AM 3 comments:

A case in progress... 14 year-old Malaysian boy with photosensitive eruption


HPI:The patient is a 14 year old student with one year history of erythematous patches on the face, made worse with sun exposure. He is otherwise healthy with no systemic complaints. He has been on no medications byh mouth. 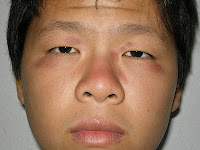 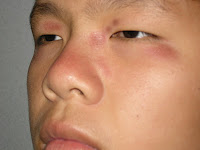 Questions: What are your thoughts pending the biopsy findings? Would you do anything different from what I have done so far?
Posted by Henry Foong at 3:29 PM 4 comments: