March 2015
"I’m not sure exactly how I damaged my nail, but it happened in May 2014 when I was working outdoors clearing brush. Either I banged it really hard or dropped something on it. It never really hurt, but it quickly became unsightly, with lots of bruising, mottling from black to deep mahogany to orange to yellow. The nail developed a significant ridge until October 2014, when it came off in one piece.

Note:  A KOH scraping was negative and fungal culture was taken. 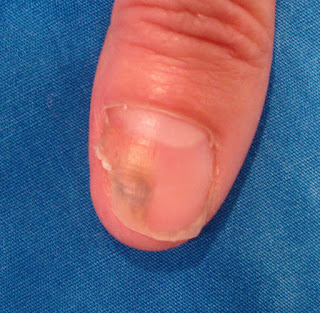 The culture grew out (Scopulariopsis), a