This 68-year-old woman presented for evaluation of painful lesions under the skin that have been present for 3-4 months. She has a history of psoriasis, which is in remission, fibromyalgia, hypertension.  There is no personal history of malignancy.  No exotic travel.  She had smoked over two ppd for decades.

EXAMINATION: The examination shows a woman who appears slightly older than her stated age. She has 6-8 freely movable subcutaneous smooth-surfaced lesions on the back, posterior nuchal area, and the upper chest. The largest is ~ 5 mm in diameter. The remainder of the exam plus breast palpation was unremarkable.  No adenopathy appreciated. 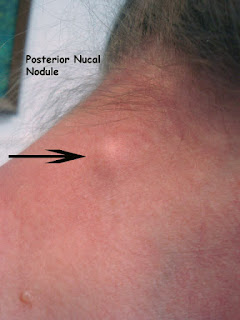 INITIAL MPRESSION: Subcutaneous skin lesions, present for only a short period of time. Etiology is unclear.

PLAN: An excisional biopsy was taken today from the lesion on the right upper back.

Pathology:
The first two are H&E of nodule in the fat, showing atypical cells with duct-like vacuoles. The second two are representative immunoperoxidase stains. GATA 3 is the nuclear one (dot-like pattern) and mammoglobin is the cytoplasmic staining.
These darkly beautiful photomicrographs were taken by Dr. Lynne Goldberg at the Boston University School of Medicine's Department of Dermatopathology.