Abstract: 2o yo man with one week history of palpable purpura.
HPI: This 20 yo college student was started on isotretinoin for severe cystic acne a month before he developed a rash on his legs. He also had an upper respiratory infection two weeks before the eruption began. He is away at school (a two hour drive). His mother called the office and spoke to my secretary. Busy week. When I heard that he had a rash, I relayed the message that it was probably the common dermatitis we see with patients on isotretinoin and if worried to send me a photo. Two days later, this photo was sent: 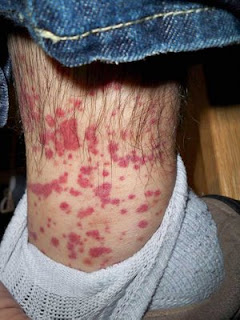 The patient was then emailed and asked to come in the next day. Labs were ordered done before the visit.

Path: Biopsy performed. Not back

Plan: Rest for a few days. No specific therapy at this time except stopping the isotretinoin. If he improves uneventfully without evidence of GI or renal involvement will offer a re-challenge with isotretinoin.

Discussion: A few cases of LCV have been reported with isotretinoin. This patient has severe cystic acne with scarring and it would be a shame to withhold drug if it were not putative for the LCV. I admit I did not pay proper attention to the first telephone call. This illustrates the power of teledermatology which can be almost standard in a few years as cell phone cameras become better and people know how to use them more adroitly.

Questions: What are your thoughts and suggestions?
Posted by Humane Medicine Hui at 5:00 PM