The patient is a 90 yo man who has symptoms suggestion of Parkinson’s disease.  Four months ago his neurologist started him on Neupro®, a Rotigotine Transdermal Therapeutic System.  His dosage was slowly increased.  The patient’s mental status is excellent, and although his back was pruritic, he could not see it.  A light-complected White with a history of skin cancer, he was seen for a regular follow-up examination during which a peculiar pattern of rectangular erythematous patches was noted. 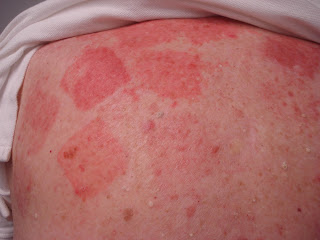 The Wikipedia page for rotigotine states:
“General side effects for rotigotine may include constipation, dyskinesia, nausea, vomiting, dizziness, fatigue, insomnia, somnolence, confusion, and hallucinations.[8][9] More serious complications can include psychosis and impulse control disorders like hypersexuality, punding, and pathological gambling.[10] Mild adverse skin reactions at the patch application site may also occur.”  However, PubMed has only one reference to  this dermatitis.  The case report was of a patient who developed ACD to the active ingredient, but not to the vehicle.

It is likely that ACD to rotigotine is not as uncommon as the literature would lead us to assume.