This 63 yo Korean woman presented to the ER with fatigue. 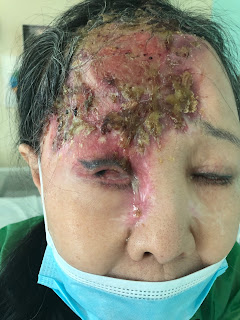 Her recent Hgb was 3.3 grams. Endoscopy revealed a gastric ulcer with no evidence of bleeding. There was no history of dark stools.

The patient believes that this was caused by a cosmetic procedure she had done in Korea by a plastic surgeon many years ago.

Pathology: The initial biopsy revealed a normal epidermis with a heavy mixed inflammatory infiltrate suspicious for infection, although special stains for bacteria, fungi and virus was negative.

Second routine biopsy and tissue biopsy for cultures is pending.

What are your thoughts as to the diagnosis.