Photoonycholysis and a Positive ANA

This 20 year-old woman developed a painful bilateral erythema of the skin at the margins of the thumbs and index fingers.  Around two weeks later, she noticed bleeding under one thumb nail and color changes under the other thumb nail.

She was seen at a walk-in clinic where no therapy was given but a battery of blood tests were done.  Among them was an ANA which was reported as positive with a homogeneous pattern and a titer of 1:640.  Her RF, C Reactive Protein and EST were normal as well as all other tests.

The positive ANA alarmed her and her parents and she sought a dermatological opinion.

The clinical images taken 3 weeks after onset show mild erythema at the margins between dorsal and palmar skin and the nail changes. 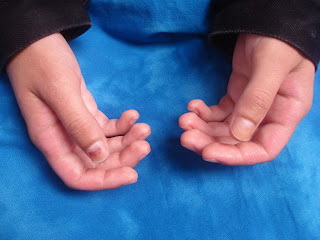 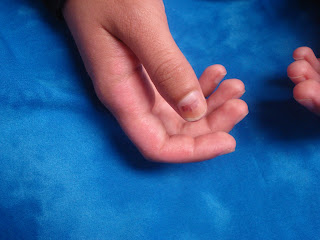 Further history revealed that she had been on doxycycline for acne  when the eruption occurred.

Diagnosis:  Phototoxic drug eruption from doxycycline with photoonycholysis.  I presume the positive ANA is a "false positive."  The test should probably not have been ordered.  As an incidental finding, taken out of context it can be anxiety-provoking.

1. Doxycycline-induced photo-onycholysisDidier Rabar, Patrick Combemale, François Peyron.  J Travel Med. Nov-Dec 2004;11(6):386-7.
Abstract: Because  there  is  a  widespread  resistance  to  other drugs, doxycycline is often prescribed as chemoprophylaxis for malaria. Although this drug is commonly used for the treatment of acne vulgaris, no large studies have been conducted on the safety of doxycycline. However, several side effects, especially skin and nail disorders, are induced by this drug. In this article, we report a case of photoonycholysis in a woman undergoing doxycyclineprophylaxis for malaria.

2. Photo-onycholysis   Following Two   Weeks of Doxycycline. KC S, Karn D, Shrestha S. J Nepal Health Res Counc  2016 Jan - Apr;14(32):66-8
Abstract: Photo-onycholysis is a form of phototoxic reaction characterized by spontaneous separation of the nail plate from the nail bed. It usually follows drug intake and tetracycline is a well-known culprit. We present a case of 19 years gentleman who developed this rare side effect following two weeks of ingestion of doxycycline.