Lynphoepithelioma-like Carcinoma of the Skin

The patient, an 87 yo man in good general health, presented with a two month history of an asymptomatic papule in the right preauricular area.

The lesion was 7 mm erythematous papule without clinical or dermatoscopic diagnostic features.  There was an adjacent seborrheic keratosis.

A 4-mm punch biopsy was taken.
Pathology:Aggregates of undifferentiated baseloid epithelium, some with central clear cell change and necrosis, associated with a peripheral rim of lymphocytes and scattered plasma cells.  In situ hybridization for EBV was negative.
These changes were interpreted as most consistent with a diagnosis of lymphoepithelioma-like carcinoma of the skin.
Thanks to Dr. Lynne Goldberg of Boston University Skin Pathology for the photomicrographs. 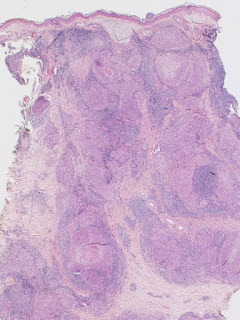 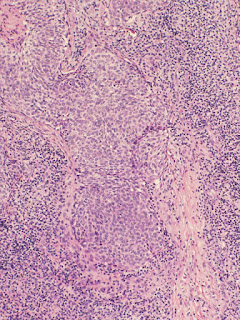 Re-excision:
Although  an attempt was made to re-excise the lesion with 4 mm margins the patholoogy showed involvement of one lateral and the deep margin.

ENT Connsult: No evidence of pharyngeal pathology
MRI: Normal with no adenopathy

The patient was referred for Mohs Micrographic Surgery.  The tumor was cleared with one stage, but a second stage was done to assure adequacy of excision.  (The patient's insurance was not charged for the 2nd stage).

Lymphoepithelioma-like carcinoma of the skin (LELCS) is a rare tumor of unknown etiology, low malignant potential, and microscopic resemblance to undifferentiated nasopharyngeal carcinoma. Clinically (as in this case), it presents as a flesh-colored firm nodule or plaque on the face, scalp, or shoulder of middle-aged to elderly individuals. Histologically, LELCS is composed of islands of enlarged epithelial cells with large vesicular nuclei surrounded and permeated by a dense lymphoplasmacytic infiltrate. LELCS exhibits immunoreactivity with high-molecular-weight cytokeratins and epithelial membrane antigen, indicating the epithelial origin.

Initially, the ENT consult felt that the patient should be referred to a radiotherapist for XRT; but the literature (see ref 3) does not support that.  He will be followed up at regular intervals by his dermatologist.

This case presentation highlights the difficulty in treating a rare disorder.  No one has enough expertise and one must fall back on the literature that may not be clear. Only about 80 of these tumors have been reported. Consultants may give opinions that are not based on science but on their own belief systems.  Where does the buck end?  The psychiatrist Michael Balint, described “The Collusion of Anonymity” in his book “The Doctor, His Patient and the Illness.”4  This holds that “the burden of responsibility is much too great, and everyone, including the patient, naturally tries to lighten it by involving someone else, or, if possible, a number of others. This may be described as the process of dilution of responsibility.

If all goes well with this collusion of anonymity all parties concerned feel justifiably proud and gratified. If anything goes wrong nobody is individually responsible.

The collusion of anonymity is one method of lightening the burden of responsibility. Present day practice in medicine is hardly more than the sum of the various specialties.

Nowadays everybody preaches that when a patient is ill the whole person is ill, not only his skin, stomach, his heart or his kidneys. This truth, while constant lip service is paid to it, is unfortunately ignored in most medical practices. A very experienced and disillusioned GP said, "nowadays it is enough for a doctor to know about 20 prescriptions and the address of about 30 consultants."