An Unusual Case of Scalp Ulceration

33 yo woman with six month history of extensive scalp ulceration

History: The patient is a 33-year-old unemployed cashier who presented for evaluation of facial erythema.  She has had insulin dependent diabetes since childhood but apparently, it was not treated for many years.  She is being seen at the Wound Care Clinic now for a large erosion of the scalp present for ~ six months. Other than insulin, her only medication is gabapentin for her scalp symptoms.

She is married.  Lives with her husband and 18 cats.

EXAMINATION:  The examination shows a 33-year-old woman with a flat affect. She has some erythema on her cheeks and bridge of the nose.  A few, but not many, papules.

She was wearing a  base-ball cap and when I asked her to remove it, I saw a 7 x 8 cm erosion on the scalp She says she has been picking on this for quite some time because it was itching and painful.

The remainder of the exam was unremarkable other than showing poor dental hygiene. 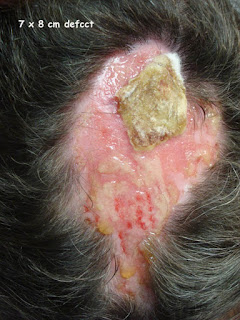 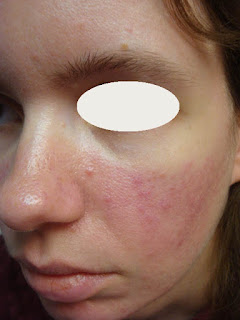 IMPRESSION:  This is a complex problem.  Her facial erythema will be treated with doxycycline.  Her scalp excoriation is worrisome. (A similar patient was described by Atul Gawande in the New Yorker a number of years ago (see reference).  I wonder if the 18 cats at home are significant.

Questions: Any thoughts you have will be appreciated.  It will be great if we can help this unfortunate woman.

2. Dr. Sharquie from Baghdad sent us a recent article of his: The Major Psychodermatological Disorders in Iraq.


Abstract:  Kerion is an inflammatory type of tinea capitis which can be mistaken for bacterial infection or folliculitis as both conditions display similar clinical features. It occurs most frequently in prepubescent children and rarely in adults. We report a 26-year-old woman who presented with multiple tender inflammed nodules on her scalp. Her condition was misdiagnosed as bacterial abscess and treated with multiple courses of antibiotics without improvement. Later, her condition was re-diagnosed as kerion based on clinical appearance, history of contact with infected animal and Wood’s lamp examination. symptoms and lesions resolved completely with systemic antifungal treatment leaving residual scarring alopecia. The delay in the diagnosis and treatment of this patient resulted in permanent scarring alopecia.

4) See previous VGRD entry of a 9 yo girl with scarring alopecia. (January 2006)


Alison A. Fischer, MD; David M. Adelson, MD; Carlos Garcia, MD
Cutis. 2014 June;93(6):E6 - E7
Absract: Ulceration is not a typical feature of notalgia paresthetica or brachioradial pruritus; a history of self-mutilation due to underlying paresthesia is consistent with the diagnosis. This case report describes a patient with underlying spinal pathology; the authors discuss this case as a spectrum between trigeminal trophic syndrome and notalgia paresthetica whereby lesions of peripheral spinal nerves may lead to unilateral ulcerations restricted to a dermatome.

6) Trigeminal Trophic Syndrome: Report of 3 Cases Affecting the Scalp
Ranti S. Bolaji, MD; Barbara A. Burrall, MD; Daniel B. Eisen, MD. Cutis. 2013 December;92(6):291-296
Abstract: Trigeminal trophic syndrome (TTS) is a rare condition that results from a prior injury to the sensory distribution of the trigeminal nerve. Patients typically respond to the altered sensation with self-mutilation, most often of the nasal ala. We describe 3 patients with TTS who presented with self-induced ulcerations primarily involving the scalp. Two patients developed delusions of parasitosis (DOP) based on the resulting symptoms of TTS, which is a unique association. Trigeminal trophic syndrome may occur at extranasal sites and in any branch of the trigeminal nerve. The condition should be considered when ulcers are encountered in this nerve distribution. Symptoms such as formication may mimic DOP. Trigeminal trophic syndrome may be differentiated from DOP by the restriction of symptoms and ulcerations to the distribution of the trigeminal nerve.