Abstract: 36 yo woman with brown-black macule on heel

HPI:  A 36 year-old woman presented in a panic with a recently discovered dark-brown to black macule on the heel of her left foot.  It had been brought to her attention by her pedicurist.  The patient had consulted the Internet and found articles about acrolentiginous melanoma which worried her greatly. Anamnesis revealed that she had been Zumba dancing a few days before this was discovered.

O/E: The lesion measured eight mm in diameter and was dark brown to black in color.  Dermoscopy revealed a black color with a parallel ridge pattern. 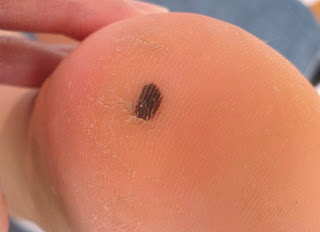 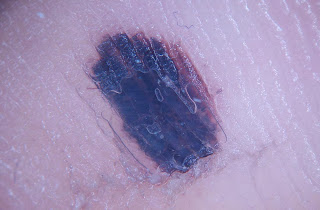 On the suspicion that this represents hemorrhage into the strateum corneum (a condition, when on the foot, called black heel or talon noir) the lesion was pared down with a # 15 blade and some of the dark pigment was easily debrided leaving a skin colored base centrally and some petechael spots were seen at the periphery.  The patient was asked to debride the area gently with a heel shaver andgiven a return appointment in two weeks. 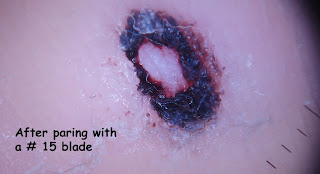 Talon noir can be a frightening entity for a patient.  Lacking a history, a physician can be fooled, since the parallel ridge pattern seen on dermoscopy is also present in acral melanomas.  History trumps clinical appearance,

Follow-up:
At two weeks out, the area is almost completely resolved, this confirming the diagnosis of talon noir.

Reference:
1. Talon Noir (Primary care Dermatology Society)  This is an excellent reference and there is no need for more.
Posted by Humane Medicine Hui at 9:16 AM